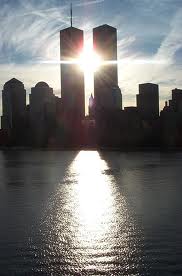 I, too, remember where I was, and what I was doing, as I heard the news for the first time. I was a travel agent at the time, and the first I knew of the events of "Nine-Eleven" was when a customer called to say that he'd heard there'd been an accident, a plane crash into one of the Twin Towers, and he wondered if and how it would affect his plans for the night flight to LaGuardia airport.  One half of my brain prayed that, assuming it was true, it had indeed been an accident, whilst the other half, the cynical half, screamed terrorism. Twenty minutes later, the world and I knew for sure.
Ten years later, ceremonies have taken place all over the world to commemorate the shocking events of the day that changed the world. Ten years later, New York City can stand and watch as the site is rebuilt from the ashes, the Pentagon once again has five walls, and a scarred field in Pennsylvania where heroes came to rest, is once again nothing more than just that. Only one thing remains the same: thousands upon thousands of people are left grieving with nothing but memories of loved ones.
Three thousand people lost their lives that day. Office workers, airline passengers, members of all the Emergency Services, bystanders watching the world change before their very eyes. America as a nation lost something else that day too: its innocence. The realisation that there are people out there whose very own lives mean less to them than the cause they purportedly stand for was a problem, a distant news item, that, until that day, was safely thousands of miles away in the Middle East and Asia. On that fateful day, mass terror, suicide terror, hit the streets of two of the most famous cities in the world. Four years later it hit the streets of London too.
That terror had a cause, has a cause. They want to change the world. They want a world that adheres to their rules, their beliefs, their dictum. It is a world that our minds cannot comprehend and cannot allow. It is a world that we're fighting against, and must keep doing.
Since that day, the day the world changed forever, everything has changed, and yet nothing has. This morning, as I thought back to the horrors in America, as the pictures replayed over and over again on television, as one caller after another on the radio recalled where they were and what they were doing, I took one of my children to play football. Yesterday was spent with family and friends, tomorrow the kids go back to school. Life goes on, much as it was before. Airport security may be tighter than ever before, we may all be a little more aware of our surroundings, a little less innocent, but life goes on, much as it was before.
Since the day that everything changed, nothing's changed.
And that's our victory.

Two men charged in connection with Operation Fernbridge Posted on 15th August 2014
Seven arrests for fraud and money laundering ukcri.me/62172 Posted on 06th May 2015
Why Am I Here ??? Posted on 05th June 2012
Man jailed for 20 years for two attempted murders Posted on 09th March 2015
Wigan man jailed for sexually assaulting to school girls Posted on 23rd May 2014
Entering the final year of my twenties Posted on 27th July 2012
Disgraced former Radio 1 DJChristopher Denning guilty of 40 sexual offences against children Posted on 14th November 2014
Woman Marks 40 Years Of Service Posted on 11th September 2014
A week is a long time but ten years is an eternity...? Posted on 12th September 2013
The Battle of El Alamein: 70 years on Posted on 23rd October 2012