on the 28th March 2012 at 10:28 - Posted in Ambulance Blog
It was the third time we were driving round the block. The reason? I had failed to park in the way Klippity wanted to me to park. I drove around sheepishly, conscious of the stare I was getting from pedestrians who had just seen the same ambulance drive past three times. â€˜Itâ€™s not me itâ€™s himâ€™ I felt like shouting out of the window. Instead I took a deep breath and exhaled slowly, imagining the stress drop away â€“ a personal technique Iâ€™ve developed for dealing with situations such as this one. 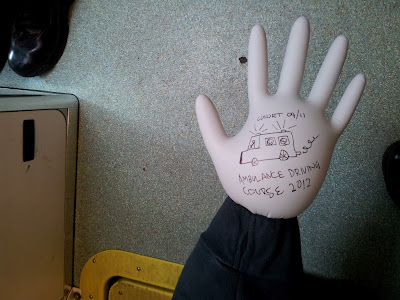 The house, number 88, was coming up on our right. Derek called out the numbers on the right: â€˜22â€¦34â€¦54â€¦62â€™. I snapped: â€˜Yes thanks Derek, I can see the numbers quite clearlyâ€™. The voice that spoke was too polite, overcompensating for the tension I felt. It sounded like exasperation. I hoped Klippity didnâ€™t pick up on it but knowing him he probably knew what I was going to say before I did.
I stopped well before the house, took another deep breath, and proceeded slowly. Just before the drive I turned the nose in then out again. Just before stopping I reversed the steering wheel to the opposite lock, hurriedly pushing and pulling the wheel as if Iâ€™d just learn to drive yesterday. I always feel like Iâ€™m opening an oil pipe or a submarine hatch when Iâ€™m doing these quick turns. I just want to spin but power steering has other ideas. I reversed slowly and, ah, the positioning couldnâ€™t have been better. The slow manoeuvre practice sessions we performed at that grim airfield waiting for the skid pan had paid off. Derek and Cruella jumped out and I stayed in the driving seat, awaiting the onslaught. â€˜Why did it take three goes to park?â€™ asked Klippity. Itâ€™s one of those questions where every answer is the wrong one. â€˜Look, you need to let these things wash over you. I saw you were getting frustrated, itâ€™s obvious. What I was doing was pushing pushing pushing to see if you would break. Your driving was actually quite good, so well done. Your patients are going to do a lot worse to you. If you say one wrong thing they can turn from your best friend to a total nightmare. Just let it wash over you, it doesnâ€™t matter at the end of the dayâ€™. I scored well for the drive, a little less well for the parking, but I didnâ€™t mind. What Klippity said resonated within me. In the great scheme of things, what did it matter that I had to drive round three times? It was my ego that spoke at these times, and I had to learn to suppress it. I was fully conscious of the role we were both playing â€“ he, the anally retentive driving instructor, me the begrudgingly submissive student. We were like two actors, the cabin was our stage, the performance diary our script.
On the penultimate morning of the driving course I was chatting to Klippity. We glossed over small talk: his motorbike near misses, my wing mirror affair, his married life, my love life, the usual really. The conversation took an odd turn as it moved onto my driving, probably a reflection of the logic behind my driving: â€˜I think Iâ€™m beginning to understand you Jerome, Iâ€™ve actually spent some time trying to figure it out. Youâ€™re the kind of person that needs to understand why youâ€™re doing something. In my day it was different, I would do as I was told and that was it. With you you question why youâ€™re doing it, which is good I think. I was walking the dogs this morning and they were busy doing their business. It struck me that drivingâ€™s a bit like that: you need to be able to defecate on demand. When I say shit, you need to shit â€“ when I say drive, you need to drive. At times there can be no questions, you just need to do.â€™ Wisdom can manifest itself in all sorts of unusual phrases, Klippityâ€™s choice selection of words might have been one of them.
The sun was shining outside, but for the last time that week we were summoned to the class room for the final debrief. The usual admin banalities were seen to and a generic congratulations was issued (for we had for the most part all passed). Klippity left us with a word of caution: â€˜when youâ€™re on the road next I want you to have percentages in mind. When youâ€™re driving on blue lights, you should be around 50-60% of what youâ€™re capable of doing. You shouldnâ€™t be at the 80-90% mark â€“ thatâ€™s when things go wrong.â€™ He may have well looked at me throughout his whole address. I felt like it was aimed squarely in my direction. It was something we discussed a few times throughout the previous few weeks. A few phrases heâ€™s used to describe my driving come to mind: â€˜hurtling towards oblivionâ€™â€¦ â€˜wipeoutâ€™... â€˜accelerating towards the hazardâ€™. The point was made, my percentages duly noted.
A week later I was at an evening seminar on acute coronary syndrome with Super Mod, Cuthbert and Gunther. The best bit about it was the free buffet and 12 lead ECG rulers they were handing out. Thereâ€™s a bit of a competition to see who can get the most by the end of the year. Some are on four and have no life. Iâ€™m lagging behind with a solitary one, but at least Iâ€™m balanced. Super Mod had some issued with his driving instructor â€“ basically he was taught and managed very badly by him â€“ which means heâ€™s having catch-up lessons with Klippity Klop. â€˜Heâ€™s actually very pleased with your drivingâ€™ said Super Mod. I couldnâ€™t quite believe what I was hearing so I asked him to repeat. â€˜He said youâ€™re a good driverâ€™. After three weeks of being torn apart, the only way I learn what he really thinks is third hand by chance. Son of aâ€¦