on the 15th March 2012 at 18:38 - Posted in Ambulance Blog
It was dark, but the moon had been waning for just one day and was full. The sky was clear and shadows were cast by the haunting brightness. There was a strangeness to the night: somehow it was frozen in that moment when a rim of the sunâ€™s glow is present on the horizon. My optic centre thought it was early morning; my suprachiasmatic nucleus told it not to be ridiculous, it was quarter past midnight. â€˜Itâ€™s like dawn coming over the horizon. I knew Dawn, lovely girlâ€™ Klippity joked.
The other three did well in their drives, and we soon found ourselves rolling through the quite streets of Pinchfoot playing spot the other DTUs [driver training units]. Our objective was Kenâ€™s kebabs. No-one including the DIs know quite why we go there. â€˜I had a kebab there last year. Oh dearâ€™ was Klippityâ€™s brief review of the place, which didnâ€™t stop him from having another this time. But first, I had a mission to complete. I slipped into the Spar on the way to Kenâ€™s, and self-consciously pulled a bottle of wine from the shelf. It felt very wrong buying wine whilst in uniform, especially whilst on a driving course! This wasnâ€™t just breaking the rules, it was defecating on the rulebook before setting it alight â€“ â€˜donâ€™t worry, Iâ€™m not on dutyâ€™ I laughed nervously to the cashier. He gave me a knowing nod. I slipped it into my bag. I had a date with a doctor when I got back and was in need of an offering to place at Erosâ€™ feet. â€˜What did you get from the shops?â€™ Asked Esther Lemsip. â€˜Do you really want to know?â€™ I replied. â€˜A bottle of wineâ€™. â€˜Er, why?â€™ Asked Cruella with a disbelieving look. â€˜Well you know that doctor from Quentinâ€™s Hospital? Well Iâ€™ve got a date with her tonight. She gets off her night shift at about the same time as we get back to Bethlehamâ€™. â€˜Wasnâ€™t she married?â€™ Asked Esther. I bit my tongue. There were wolf whistles from the circle â€˜Oh Jeromeo, my estimation of you has just plummetedâ€™ said Cruella, laughing with reproach. I got high fives from half the group and hisses from the other.
It was only then that I had time to take in the true bizarreness of where I was. Everything took on a faint red glow from the garishly painted walls. There were painted murals on the walls depicting painted scenes of kebab shops in the most unlikely of places. â€˜Lunarbabsâ€™ showed a kebab shop on the moon, whilst â€˜aquababsâ€™ was under the sea. Del Boy Mavis was offering chips around, which looked one part potato to three parts oil. I looked at my finger after having one, half expecting it to turn transparent. What kind of public health message were we giving off here? The most well respected ambulance service in the country lives off fast food. Judging by the waist bands of a depressing number in the service, it really is. 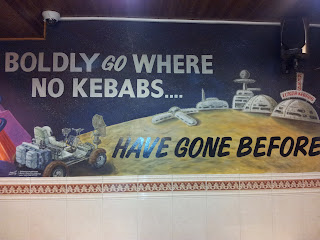 On the motorway back home we worked on positioning on the road. I raced Kazoo back, the speed hovering at a terrifying 75mph throughout. It felt like racing on he back of an obese geriatric. â€˜Comon Jerome, we need to win thisâ€™ came the encouragement from the back. They were winding me up the bastards. â€˜My footâ€™s been glued to the floor for the last half an hour, itâ€™s all youâ€™re going to getâ€™ was my desperate response, which didnâ€™t stop them from heckling me. The main thing is that we won, and my marks had improved despite a pretty mediocre performance. I think Klippity couldnâ€™t be bothered to argue so he filled the boxes with fours.
I was the last to leave the building, jumping onto the bike and buzzing through the empty streets with nout but a screaming engine for company. I was tired but, bottle in bag, willing to extend the abuse my circadian rhythm had already sustained for just a little longer.