on the 15th April 2012 at 23:27 - Posted in Ambulance Blog
A few months ago I entered the Carol Furber case study competition hosted by the College of Paramedics, the professional body of the UK ambulance service in the UK. It's an excellent organisation that represents and campaigns for the profession. It also runs many extra-cirricular training sessions for ambulance techs, paramedics and students. The case study was limited to 1000 words, and other than the need for it to be reflective, the criteria was relaxed. I entered because I thought I might learn something in the process â€“ for all five placements we go on this year we need to provide a reflection anyway, I could possibly kill two birds with one stone. The deadline was 1700hrs, New Year's Eve. Twenty minutes before, I was still glaring at it, discontent with the product of what was probably a week's solid work, but relieved the ordeal was over. A few months later, the case study had receded to a neglected, dusty shelf somewhere in the vault of my memory. I still took it down and blew on the cover from time to time, wandering whether they'd bother to send a rejection letter or whether I'd just learn when they announced some other winner. For some inexplicable reason, I began to develop a faint glimmer of hope. I tried to reason with it, the competition was open to all members of the College across the country after all â€“ but did it listen? Did it bugger. I emailed the coordinator a little while later â€“ no response. Impatient, I emailed again and again, the hope ballooning until it occupied an unfair proportion of the vault.
We had a lesson with Geoffrey Hoy-Eyre in the usual tiny, inadequate class room we're banished to in Greygobble university. He appeared at the door but stopped, neither inside nor outside the room. Looking round, he spotted me and bade me follow me with a gesture. I got up and walked across the room to the tuts of my peers, who suspected some wrongdoing. As did I, and my mind raced as I tried to figure out what it could be. Then he informed me â€“ I had won the case study. My prize? A silver salver and a Â£40 book token. That's about Â£1 for every hour I worked on it, but I didn't care, I was chuffed to the bollo... I was very happy indeed.
I followed him into the classroom and he announced it to the class. I hadn't told them because, well, because I only decided to do it once we were on christmas holiday. It did mean, however, repeating what I had entered and what I had written about twenty times once the results were out. I promised to publish it here, and when the stars aline and the month begins with L and twenty three virgins all with the name Susan dance around Stonehenge singing It's A Small World After All, I'm a man of my word sometimes. No really, sometimes definitely I am. So here it is...

Patient confidentiality will be adhered to during this case study in line with Health Professions Council guidelines (2007) and Joint Royal College Ambulance Liaison Committee (JRCALC) guidelines (2006). This case study will adopt as a template the incident, feelings, evaluation, analysis, re-action (I.F.E.A.R.) paramedic-specific reflective model adapted from Gibbsâ€™ reflective cycle (Wade 2011, Gibbs 1988).
On Wednesday 16 November 2011 I was supernumerary on an ambulance, halfway through my first week observing in my first year as a student paramedic. At 13.15 the crew received an amber call to an 81-year-old male with breathing difficulties in a care home not far from our location. The call was accepted straight away on blue lights, and time on scene was approximately 13.25. Upon arrival, the crew was led to a first floor room. At the doorway to the room, the patientâ€™s breath sounds could be heard, presenting as loud bubbling sounds emanating from his mouth on both inhalation and exhalation. Upon inspection, the patient was lying supine, very warm on his forehead and chest but cool at the peripheries and with a slow capillary refill. His chest was heaving and shoulders moving up and down during breathing, suggesting a recruitment of sternocleidomastoid accessory muscles.
The crew conducted a primary survey. Response to voice and pain was absent, with a GCS of four. One point was awarded because the patientâ€™s eyes were open but not blinking, however pupillary response was slow. He was sat at a 45-degree angle to allow the lungs to drain, which resulted in an immediate reduction in breath sounds. High-flow oxygen was administered via a non-rebreathe mask. Blood saturation was fluctuating around 94% without oxygen, which improved to 97% with supplemental oxygen. Pulse was rapid, between 120-130 bpm at rest. Blood pressure was approximately 94/70, showing a narrowing. Based on the observations made, the crew queried sepsis. The patient was moved on the trolley bed to the ambulance and a pre-alert was given to the hospital.
Although I had heard of sepsis before, I was unsure of what it was. My lack of knowledge meant I felt overwhelmed and confused. I did what I could, such as carrying and sorting through equipment, but I still felt helpless despite the crewâ€™s efforts to include me. In the ambulance the condition was explained to me by the attending paramedic, which provided some clarity. His knowledge on the subject was impressive, an example of the type of practitioner I aspire to be. Watching the crew come to consensual decisions in a time critical situation was also impressive. It has motivated me so that when I start treating patients, I too can act with the same level of professionalism.
Sepsis is essentially an exaggerated immune response. According to the table below, which remains the gold standard in sepsis definition, the patient was showing the first signs of septic shock. The patient qualified for organ dysfunction with a severely altered mental state (which was not normal for the patient), query lactic acidosis. In addition, the patient had a narrowing blood pressure, which was of concern. Because of the late stage of infection, the signs were obvious. But in less advanced stages, the signs for sepsis are often subtle, which makes diagnosis challenging. For instance, to qualify for sepsis there must be a documented infection, but this can sometimes be â€˜extremely difficult to locateâ€™ (Rote and Huether 2009). 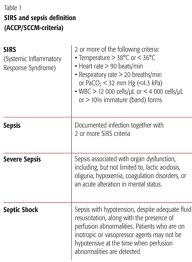 (ACCP/SCCM 1992)
The care home nurse arrived halfway through observations and revealed the patientâ€™s medical history. He had been suffering from a chest infection, which was the reason for the requested hospital visit, but otherwise had been speaking that morning. From the volume of fluid in the patientâ€™s chest, pneumonia may have been the origin of the queried septicaemia (Robson et al. 2009, Plantz and Adler 1998). Although the patient had a systolic pressure of over 90, the marked tachycardia, narrowing pulse pressure and altered mental state suggested that the patient was in stage three decompensated shock (JRCALC 2006).
Sepsis is a prevalent condition. In the UK, the annual incidence rate of severe sepsis is around 200,000, accounting for one third of hospital and intensive care unit bed days (Nee 2006). Inconsistencies in the treatment of severe sepsis exist in the prehospital environment. The Surviving Sepsis Campaign (SSC), amongst other voices, suggests that ambulance services have an opportunity to improve sepsis mortality rates, comparable to their treatment of other time-critical conditions such as acute myocardial infarction or stroke (SSC and Robson et al. 2009).
Moves are being made to improve the identification and treatment of sepsis by, for instance, the East of England Ambulance Service Trust (EEAST). According to their statistics, of the 37,000 people in the UK killed by sepsis annually, 10,000 of those deaths are preventable. EEAST are establishing streamlined care pathways for its treatment as well as educating its clinicians. In hospital, the primary method of screening for severe sepsis is known as the â€˜Sepsis Sixâ€™ (Survive Sepsis 2011). In order to speed up the diagnosis and treatment, more elements of the Sepsis Six could be carried out on the ambulance (Robson et al. 2009). 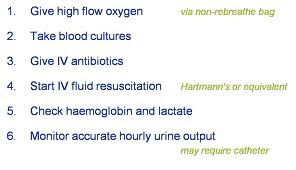 (Survive Sepsis 2011)
It was my lack of clinical knowledge that originally prompted me to learn more about the condition, which I feel I have achieved. What became apparent over my placement week is that knowledge is only effective when accompanied by experience. Confidence in these situations comes through carrying out such procedures countless times. What I find frustrating is that I have no idea of the patientâ€™s outcome. If the ambulance service is committed to career-long learning as stated in the HPC guidelines (2007), then patient outcome should be made more readily and systematically available to the treating clinician. Understanding the implications of our treatment strategy is surely the best way to become more rounded, effective practitioners.
An online petition calling on the government to prioritise sepsis can be found here
Bibliography
American College of Chest Physicians/Society of Critical Care Medicine (1992) Chest 101(6) 1481-1483
http://chestjournal.chestpubs.org/content/101/6/1481.full.pdf+html accessed 26/12/2011
Ambulance Life (2011) Sepsis Recognition A Priority For Trust
http://www.ambulance-life.co.uk/2011/12/08/sepsis-recognition-a-priority-for-trust accessed 27/12/11
East of England Ambulance Service Trust (2011) EEAST clinicians call for sepsis to be an established medical emergency and NHS priority
http://www.eastamb.nhs.uk/default.aspx.locid-00qnew0e5.Lang-EN.htm
accessed 27/12/11
Gibbs G (1988) Learning by Doing: A Guide to Teaching and Learning Methods Oxford: Further Education Unit, Oxford Polytechnic
Health Professions Council (2007) Standards of Proficiency: Paramedics
http://www.hpc-uk.org/assets/documents/1000051CStandards_of_Proficiency_Paramedics.pdf
accessed 27/12/11
Joint Royal Colleges Ambulance Liaison Committee (2006) UK Ambulance Service Clinical Practice Guidelines, Norwich: Ambulance Service Association
Nee P A (2006) Critical care in the emergency department: severe sepsis and septic shock Emergency Medical Journal (23) 713-717
Plantz SH, Adler JN (1998) Emergency Medicine Baltimore: William & Wilkins
Robson W, Nutbeam T, Daniels R, (2009) Sepsis: a need for prehospital intervention? Emergency Medical Journal (26) 535-538
Rote NS, Huether SE (2009) Infection Pathophysiology: The Biologic Basis for Disease in Adults and Children (6th edn) USA: Elsevier Mosby 293-333
Survive Sepsis (2011) The Sepsis Six http://www.survivesepsis.org/#/sepsis-six/3525187 accessed 28/12/11
Wade C (2011) Planning and writing an evidence based critical reflection Journal of Paramedic Practice 3 (4) 190-195