What It Is I Do Now

written by Random Acts Of Reality

I don't think that I've properly explained exactly what my new role is. In part because, much like my old job, what initially seems quite simple (For ambulance work - go to a sick person, pick them up and take them to hospital, try not to let them die) is actually fairly complicated.

I currently work in a hospital building, tucked just behind the A&E department (sorry 'E.D'.) while the entirety of the hospital is funded by one structure, the Urgent Care Centre (or UCC) where I work is funded by another completely different group (it gets even more complicated as this group is about to merge with another group...)

The short version of what I do as a NP (nurse practitioner) is I see patients with minor injuries and illnesses, and then I make them better.

This is massively simplified.

There are two main roles in my new post - 'triage' and 'working in the back'. When I triage (which lasts for around four hours of my shift), along with an ED nurse, I see patients as they enter the hospital and book in at the ED reception. Sometimes they want to see the UCC, sometimes they want the ED. It's my job to decide where the patients go. For example, someone with a verruca may well come to the hospital expecting to be seen in the ED (because, of course, a verruca is an emergency) - I will instead direct the patient to the UCC where someone who is 'working in the back' will tell them to get some verruca cream from the local chemist.

Sometimes someone will come in expecting to go to the UCC, but will end up in the ED. A recent example would be the chap who turned up with a 'cough', who actually had a rip-roaring case of pneumonia and would need admitting to hospital for some rather powerful drugs.

Once more I simplify - partly for sanity sake, partly because this is a quick overview, and partly because at the moment there are huge political ructions going on at pay grades far above mine as to the best way to see and sort all the patients that pitch up at the hospital.

'Working in the back' is where you actually see, assess and treat the patients you may well have triaged only half an hour ago. Little two-year-old Timmy with a cut to his head will be called into an examination room where I'll assess him to make sure that he isn't going to drop dead from an undiagnosed fractured skull. I'll then clean the wound, glue it shut and then educate the parent (or Timmy if the parent is a bit dim) about how to look after the now neatly glued wound. I'll also tell them that if Timmy decides to have a seizure or collapse unconscious they should think about bringing him back as the head injury is obviously a bit more serious than I originally thought.

I then type up the notes on the computer system (because we are a paperless system. Mostly), discharge the patient and then call in the next one.

Repeat that for the rest of my twelve and a half hour shift.

This is a picture of one of the examination rooms. 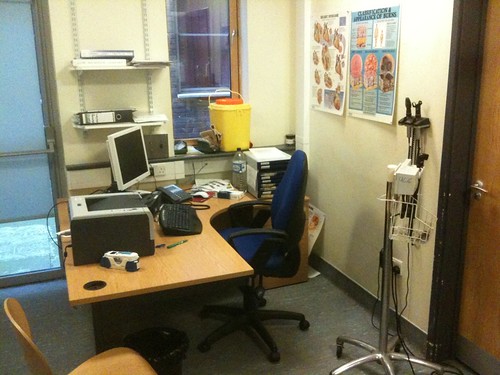 As far as scope of practice goes - we are a mix between the old A&E minor injury department (broken bones, twisted ankles, bumps to the head) and a restricted GP service (sore throats, urine infections, sick children and emergency contraception). In fact a lot of people treat us as a GP service - and that is one service that, for several reasons, we often can't provide - but I'll write more on that later.

Endings
Endings
Lurgy
Off Late
What It Is I Do Now