It's Not About The Pus

on the 19th February 2019 at 16:23 - Posted in Ambulance Blog To Dr. Sandra Lee. Heartfelt thanks for humanizing medicine and for inspiring along the way... 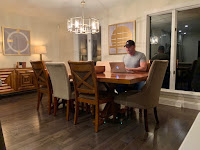 Several years ago, my daughter Emma introduced me to some videos on YouTube of a dermatologist from California who posted her sometimes shocking but always intriguing encounters with patients who suffered from a variety of dermatologic issues. Of all of these videos, it seemed like the ones which made Emma happiest to watch were the videos in which this doctor's treatment resulted in gallons of pus draining from some part of the patient's body.

You get the picture.

With some great finesse and skill, and with a good mix of humor and learning, Dr. Sandra Lee, better known as Dr. Pimple Popper, was able to help many embarrassed patients survive their dermatologic issues, all the while captivating my daughter's interest. "Eewww, gross," Emma said. "Let's watch it again!"

Suddenly, my job as an ER physician was boring. Stories of heart attacks, strokes, traumas, broken bones, asthma attacks, allergic reactions, even drunks vomiting on me at 3 am--none of them held any excitement compared to the ten-year old massive cyst that Dr. Lee excised from a women's scalp or the golf ball-sized lipoma she removed from the upper back of a man who hid it by wearing a draped shirt. Yes, it was intriguing even for me to watch. How was I going to compete with Dr. Lee popping juice out of everything she touched?

I lost my daughter to the wonders of Dr. Lee. "Dr. Pimple Popper is so great, Dad!"

Not only Emma, but soon my friends and family were asking if I did "the stuff that Dr. Pimple Popper does." They too couldn't seem to get enough of the various videos posted on YouTube. And like Emma, more pus equaled more entertainment. Pus that flew across the room--well, that created a giddiness that could not be contained.

I was wrong. After finding out that most of my procedures were performed on problems smaller than the size of a tennis ball, my people lost interest.

As the last few years passed, I was happy to catch an occasional YouTube video of Dr. Pimple Popper. Dr. Lee's contagious personality and warm smile, combined with her intelligence and skills, helped her to create a spectacular vehicle, by use of videos, to share the fascinations of her profession. She was a natural at bringing some amazing stuff to eager viewers who were insatiable for her.

On a recent trip with friends to Toronto to celebrate the arrival of 2019, we had returned to our hotel rooms one afternoon to rest for a few hours after a very late previous night of fun. While channel-surfing, I was excited to rediscover Dr. Lee and learn of her new television show on TLC. Desperately needing a nap, I committed myself to just watching her for ten minutes, maybe fifteen at most.

Fifteen minutes turned into two hours. In the blink of an eye.

This time, though, watching Dr. Lee was a very different experience. Yes, all of the fascinating lumps and bumps and lesions that needed squeezed, drained and excised still existed. Yes, white and brown and green and black pus still oozed from the majority of her patients. Yes, many of her patients still found brilliant ways to hide their ailments for years, under wigs and baggy clothing or with caked-on makeup.

This time though, among all the hoopla, I was able to appreciate Dr. Lee's magnificent mannerisms, her empathy, her compassion--her realness, so to speak--in dealing with her patients. Recognizing these things initially, I believe, had gotten lost within all the other excitement. I was more focused on how fast she could duck away from some flying pus rather than her gentle approach to patient care.

For example, after a patient was kindly greeted by office staff and placed in an exam room, the real magic began. Dr. Lee would softly knock on the door of the treatment room before entering, wearing a smile and exuding warmth. As she approached the patient, hand extended in greeting, she would establish eye contact with the patient and introduce herself with a gentle and calm voice (sometimes simply by her first name). From there, if anyone else was in the room, she would turn her attention to them, making sure to introduce herself, repeating the process until she was acquainted with each person in the room. After introductions, she would sit down (yes, sit!!!) and begin her interview with the patient, involving the patient's company, learning everything she could about the reasons a patient was visiting her. Respect was given and received. Eventually, a wonderful level of comfort was achieved.

I could continue on with the importance of Dr. Lee's empathy and compassion while performing a detailed exam, explaining her findings of the exam, reviewing test results and options to treatment, and mapping out the future course of dealing with a patient's ailment, but it all seems rather obvious, right?

You would be surprised at the number of patients who go through the process of a medical encounter only to leave with confusion, frustration, or feeling worse than prior to their encounter. No introductions. Standing at bedside with arms folded, appearing disengaged and aggravated. Rushed conversation. No updates. Abbreviated result explanations and dispositions. This is the reality of an encounter for many patients.

Recently, a close friend of mine had to take his elderly mother to a rural ER twice, in a span of two weeks, for some serious and concerning symptoms. To hear him talk of the vast difference in the care they received, by the same facility but different treating teams, was upsetting. During the first encounter, introductions were made, respect was given, explanations were provided, and a detailed treatment plan was initiated. During the second visit, there were no introductions by either the physician or nursing team. His mother was dismissed or hushed each time she tried to explain her symptoms in some depth. They were made to feel like a nuisance. No rechecks were performed. They sat around for five hours wondering what was going on. Their questions brought no answers. "And Jim," he said, "only about five of the twenty rooms had patients in them." My buddy's family was truly disheartened and discouraged by the encounter.

Years ago, during my emergency medicine residency in Syracuse, we had a physician who gave lectures to us on the importance of empathy and compassion. Being young-guns in a big trauma center, Dr. Ruth's lectures were not nearly as exciting to my buddies and I as compared to lectures on how to drain an expanding epidural hematoma (a potentially fatal arterial brain bleed) or perform an emergency thoracotomy in a trauma patient (rapidly opening the chest between ribs to clamp a sheared aorta or contain bleeding from a punctured heart or lung, for example).

Yet, it was during residency when I truly realized the power and magnificence of empathy and compassion in medicine. Of respect and dignity. Of smiling and bringing into a patient's room good energy. Of sitting down if even but for a few minutes. Of introductions and eye contact to all in the room, not just the patient. Of a warm handshake. Of explaining findings of the exam, of the testing and procedures to be done and the ensuing results, and of a plan moving forward. Of rechecking the patient during their medical visit. Of properly closing the loop of their visit with a goodbye or good luck wish.

This was a crusade I took up while working with our residents as a core faculty advisor. I became Dr. Ruth, insisting on my residents bringing their very best to each patient encounter. While empathy and compassion and ease of conversation was inherent and easier for some residents, for others more time and work needed to be invested to improve this part of their patient encounters. An investment, I stressed, that was worth pursuing.

Yes, the ER gets busy. Crazy and insanely busy. I get it. I've witness it firsthand for 22 years as an ER attending physician. However, all of these things mentioned above take just a few extra minutes. Providing anything less is met with too many excuses. Occasionally, in the emergency setting, it truly is beyond our control that we simply can not provide more empathy or time to a patient (think about a car accident with four critical victims arriving at the same time). Otherwise, if it were me or my family or friend lying in that hospital cot as a patient, I would greatly appreciate those few extra minutes of kindness and compassion provided by the treating medical personnel.

What if it was you or your family member?

Returning to Dr. Lee's TV show, then, on that lazy afternoon in Toronto, I greatly appreciated her kind approach to each patient. Sure, she might have more time working in an office setting that is more predictable and controlled compared to my working environment in a big trauma center. Sure, she is being taped to splice together some great scenes and moments of the various care she provides. Sure, anyone might give a little more of themselves if they know they are being watched. However, Dr. Lee consistently demonstrated her excellent bedside manner with each patient encounter I watched. She excelled and inspired in a part of medicine that is often ignored and overlooked, all for the sake of moving more patients in and out and increasing the billing so more profits could be made.

I could have cared less about how much pus would fly out of her next abscess or where it would land. I was enthralled on simply watching a great doctor doing her job well, from every perspective.

I hope Emma was, too.

Thanks, Dr. Pimple Popper. It was never really about the pus...

As always, big thanks for reading. What are your thoughts and experiences?

Feel free to forward or share this post. To visit some of my favorites listed from the archives, visit Thank You...

I continue to be amazed with the amount of support and readership. My heartfelt appreciation to all...