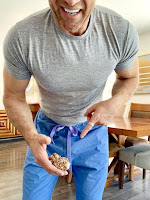 Case in-point. Recently, I treated an ill but gracious female patient who came to our ER with her husband. She had a fever and a wicked case of nausea and vomiting with diarrhea. After multiple bouts of diarrhea at home, they came to us by private vehicle. Along the way, this patient had more diarrheal and vomiting accidents in their car. Everything she was wearing was soiled. Arriving to our facility, she had to walk through our security station (yes, they swept her for weapons with a wand) and our waiting room before being brought back to her room. Talk about a walk of shame! In her room, she had yet another accident. We all felt bad for her. Seriously.

Arriving home and pulling into my driveway, my mind went from all these thoughts back to my squatting friend. Catching him in his private moment dominated my thoughts for my twenty minute ride home and took my mind in the directions above. I wondered if someday I would ever be caught squatting outside, pants down around my ankles, grunting and doing my business with reckless abandon. If so, would I have an extra Kleenex in my pocket? Would I be smiling a devilish smile while doing it? Would I do it during the day or wait until nighttime? Would someone spot me the way I spotted this fellow? If so, with my luck, it would be a newspaper reporter holding a camera.

I'm hopeful I won't ever be in this position but one never knows for sure. I'm sure this guy didn't plan on having a witness. Maybe one day, I wondered, I might be a patient in the ER having an accident. This would be a more likely scenario. If so, it will probably happen when I am elderly and obsessed with my bowel movements and the amount of daily fiber I am intaking. Or maybe I will just be an angry old man who needs to show the ER staff who's boss.
I doubt, though, that it will happen due to me being intoxicated or high on methadone.
After all, I don't have time for that shit.