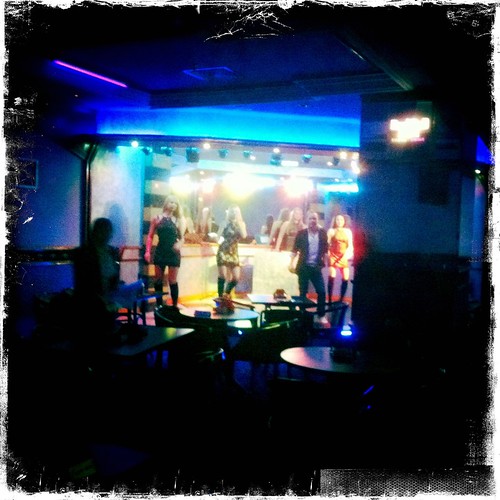 A night out is tricky on this event – as everyone’s knackered and last year our hotel was dry, meaning that anyone who fancied a pint had to take a cab to another hotel.

Thankfully this year our hotel had it’s own nightclub, called rather brillianty the “Fun Pub Club”.

By the end of the weekend, you didn’t even have to say its name, you could just shout random syllables that ended with “ub”.

“Do you fancy heading down to the LubBubSubCubPup?”

Without doubt, the best bit of the RubADubDubHub was being entertained by an MC/DJ who looked like he’d once fronted a budget Spandau Ballet cover group. He was ably supported by a group of ladies who present me with a literary challenge: how to describe four dodgy Russian hookers without descending to the phrase “dodgy Russian hookers”.

So anyway, there’s this hair-oil merchant and four dodgy Russian hookers who dance for him.

Though dancing involved stepping forward and back while occasionally waving your arms.

So there’s this slithery bar-room warbler and his four Dad-dancing Bolshevik slags.

One of the dancers was clearly the professional of the bunch, as she was able to flick her hair, pout her lips and bend her knees. Though not always simultaenously; she often got distracted by the dancer on the far left, the pudgy, permed one who was apparently the MC’s squeeze.

On certain numbers she’d take the microphone in a stodgy fist and sing – entertaining enough in its own way, but nowhere near as funny as watching her colleagues try not to laugh out loud at the stream of bum notes.

One night we went down to find two young marshalls in paradise. They had burgers, fries, a precious Heineken each (each!) and cavorting Russian ladies with over-straightened hair and padded bras. Really, what more could you ask for at 18?

I manage to take one photo before a barmaid, fearful that I might be a talent scout from Razzle, chased me off.