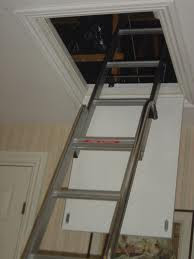 You will see shortly why the words 'access OK' was the least of our worries! Generally, access is always OK. If it isn't, it's made OK via a well placed boot or the police's universal red key! Normally it's the exit which is troublesome! Never more so than today!
I...pulled...up to the house around 7 or 8 and I yelled to the patient 'Yo homes what's the problem?!'.... only kidding! We pulled up, grabbed our stuff and knocked on the door. The patients wife came to the door looking extremely worried.
"He's been up there for ages and isn't making any sense, something's not right."
"OK my love, where is he?!"
"Upstairs, in the loft"
THE LOFT! Obviously! Where else would he be?! The MOST inaccessible part of any house! Sure enough, at the top of the stairs was a rickety old ladder, leading up to a hatch in the ceiling. Being an old Edwardian terraced house they were high ceilings too. I poked my head up into the darkness and shone my torch around. The loft had no lighting, no proper boarding and insulation everywhere that made my skin itch just by looking at it! Oh how I was cursing the 'bare below the elbows' uniform policy now. Sitting about 20 feet away from me, against the water tank was our patient. I pulled myself up and using the rafters as support carefully traversed the floor beams to him.
Within about 3 seconds I was aware of two things: 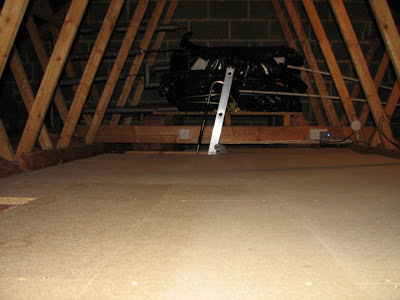 There isn't much we can do for strokes other than get them to hospital quickly. There is a 4 hour window in which the hospital will be able to give a stroke patient treatment. We were possibly two and a half hours into that window. I clambered back to the hatch where my crew mate (who was conveniently terrified of heights) was waiting at the bottom.
"FAST positive CVA (stroke), no way we can get him down safely as he is."
"HART (Hazardous Area Response Team)?"
"Yeah, it'll have to be. Can you grab me the Lifepack too please."
Crewmate vanished and returned a minute later with all the monitoring equipment! She tentatively climbed a few rungs of the ladder until I could reach her.
"HART not available! Fire Brigade on way!"
The ONE time they are needed! No wonder road staff see them as a joke! Aarrrgghh! I won't waste my breath on ranting about them again. The sensitive souls will only moan about me being mean! Anyway, the fire brigade are better equipped and much more experienced at this kind of thing, probably for the best!
Within minutes they were on scene. One of them appeared through the hatch and promptly provided the whole loft with light! He asked me what I wanted, and I just said I wanted the patient down to the ambulance quickly! Kit and more fireman gradually started appearing the loft. I stepped back and let them get on with it! They quickly got him into their deep scoop and strapped him in. The scoop was attached to some ropes and eventually, with a combination of make shift pulleys and man power he was lowered down the ladder and promptly carried down the stairs to the waiting bed! 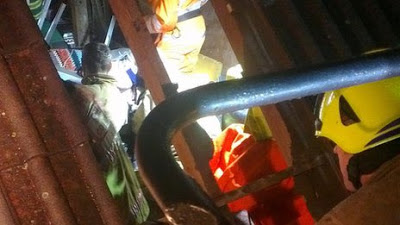 My eyes took a moment to adjust to the light and by the time I'd passed my stuff down and clambered out my crewmate, the patient and wife were on board! Groups of neighbours were out on the street watching the drama unfold. We didn't stick around, the clock was still ticking and we had a 30 minute blue light run to the nearest stroke centre. I thanked Trumpton and off we went. We arrived at the hospital with 25 minutes of 'X time' remaining. A job well done!
'Access OK'! Pah!