on the 16th December 2013 at 11:55 - Posted in Ambulance Blog
Recently East Midlands Ambulances Service launched a new campaign to try and reduce inappropriate calls. It was inspired! 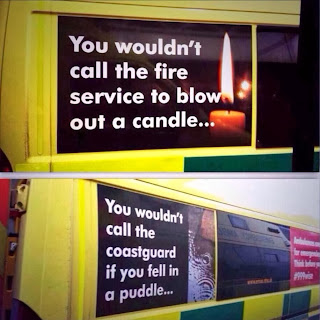 You really WOULDN'T do either would you! For the people with any common sense and even the smallest amount of intelligence, it is clear what is meant by these posters. STOP calling ambulance for coughs, cold, cuts, scrapes, bumps, bruises, headaches, lifts to hospital, tiredness and the plethora of other minor ailments that some people seem to think warrant an ambulance! The new is overrun with stories about long delays waiting for an ambulance or 12 hour delays waiting for treatment in A & E. This is just fodder for the Daily Mail and Evening Standard to get their NHS bashing teeth into. What the stories don't expand on, is what was actually wrong with those poor individuals who had to wait 12 hours to be treated! I can assure you, it wasn't anything that needed treating immediately! In fact, I'd be happy to lay money on the fact that it probably wasn't anything that they even needed to see a GP about! Some people just don't seem to understand that people get ill!we all do! It sucks, we can't sleep, we cough, we splutter, we moan, we get hot, then cold, we ache and eventually we get over it. By 'we', I mean normal people.
Sadly, these campaigns appear lost on so many people, as today's shift proved......
"36 year old, diabetic problems" 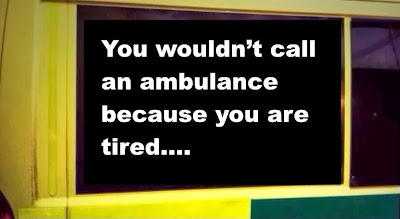 Let's be clear. Just because you have diabetes does not mean than anything wrong with you is due to your diabetes. It is however a good trick to get a quick ambulance to your place of work. Lying in the first aid room like a dying swan was our patient. His 'diabetes with a reduced level of consciousness' was what got us there quickly. If he'd actually said what was wrong, we'd never have been sent.
The reality was is that he was tired. Just tired. He had young kids and wasn't sleeping. His blood sugars was completely normal and he knew it. For effect he kept pretending to drift in and out of consciousness to the first aider. He 'couldn't walk' and 'couldn't open his eyes'. He 'couldn't talk' and 'couldn't be roused'. Needless to say, he was quickly roused, eyes the promptly encouraged open, he spoke when spoken to and obviously walked to the ambulance. Not impressed. Oh, and if you canâ€™t cope with the tiredness that comes with parenthood, you should have kept the mouse in the house. Just sayinâ€™.
General Public 1 - 0 Ambulance Service
"44 year old female, not alert with head injury, there is serious bleeding, abnormal breathing" 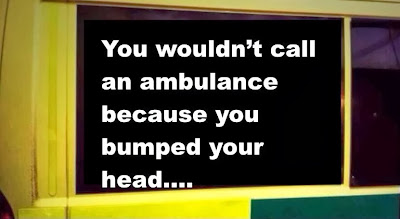 Blimey. SERIOUS bleeding. It MUST be bad. It appears whoever had called 999 had swallowed the textbook on how to get an ambulance quickly. 'Head Injury', 'Not alert', 'Bleeding' and 'DIB'. It sounded like the poor patient was in a whole world of trouble.
Has anyone ever had that horrible experience whereby you bend down to get something out of a bottom cupboard, stand up and hit your head on the open cupboard above?! Horrible isn't it?! Call an ambulance for it?! Didn't think so....
That is exactly what had happened. The head injury was a bump on the head as a result of standing up into a cupboard door. The serious bleeding created about as much blood as a paper cut. The patient was fully alert and putting on an Oscar winning hypochondriac performance. The was no difficulty in breathing whatsoever. He inability to walk was promptly converted into a walk to the ambulance. Another waste of a resource.
General Public 2 - 0 Ambulance Service
"30 year old female, drifting in and out of consciousness" 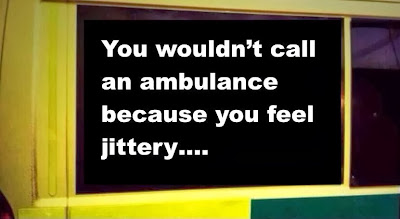 LOSING CONSCIOUSNESS! Quick, sound the alarm, send the cavalry, time is critical, run for your lives!!! OK, slight overreaction but she got the quick response due to her critical medical condition....
On arrival she was sat up grinning like a Cheshire cat, awfully proud of ailment. From her comprehensive handover it was clear that she had a degree in â€˜Google Medicineâ€™ and had self diagnosed an abundance of medical conditions. She busted out some medical big gun terminology too like â€˜wobblyâ€™ and â€˜jitteryâ€™. Needless to say, her two week history of vague symptoms didnâ€™t lead us to believe she had anything wrong with her that warranted an ambulance. This was confirmed by her feigned reluctance at going to hospital followed by an avid insistence it was the right thing to do! Better safe than sorry eh?!
Yes, iâ€™m safe in the knowledge that there is nothing wrong with you and sorry that youâ€™ve hoodwinked the ambulance service into sending you ambulance.
General Public 3 - 0 Ambulance Service
â€œ27 year old male, chest pain, DIB, fever, not alert, shakingâ€ 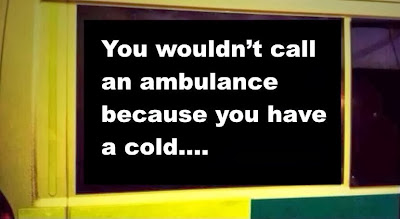 Poor, poor guy. To have central crushing chest pain is bad enough, but difficulty breathing too?! No wonder he needs an ambulance! A fever?! He must feel awful and not to mention the shaking! Wow! What a trooper.
After a thorough examination it was just as I feared. Neither of us wanted to break the news to him. These life changing moments are best delivered by trained professionals, not us meagre ambulance drivers. Eventually my crew mate plucked up the courage.....
â€œYou have a common cold.â€
Silence engulfed the ambulance as the gravity of what had just been said sunk in. As with any tragedy there are 5 stages of grief this guy went through them all bless him.
â€œI know my body, it canâ€™t be a common cold!â€ DENIAL
â€œIt is.â€
â€œThis is ridiculous, I want to see a doctor.â€ ANGER
â€œThatâ€™s fine, weâ€™ll pop you up to hospital.â€
â€œAre you sure it couldn't be meningitis?â€ BARGAINING
â€œIâ€™m sure.â€
â€œI just feel so weak and ill, Iâ€™m always ill, I donâ€™t get it, Iâ€™ve got so much on my plate at the moment.â€ DEPRESSION
â€œ*silence*â€
â€œOK, but I still think I should see a doctor, be on the safe side.â€ ACCEPTANCE
â€œGood idea, put your seat belt on.â€
Yep, always best to be on the safe side. Iâ€™m not sure what it is the safe side of but always best to be there. Another waste of an ambulance though!
General Public 4 - 0 Ambulance Service
It goes to prove that no matter how effective an advertising campaign is, ambulance services can only go by what they are told. People know the buzzwords, people exaggerate, people think they are the priority and people think they are entitled to an ambulance at the drop of a hat. The sad fact is, if someone wants an ambulance enough they will most likely get one. Today they won. And when they do, genuine patients will suffer, A & E departments will get overrun and the Daily Mail will have a field day. THINK before you dial!