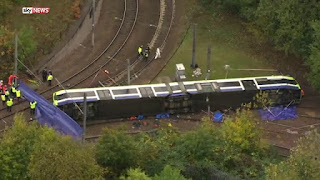 On Nov. 9, 2016, a tram derailed near Addiscombe Road in Croydon, killing five people and injuring more than 50 others. The London Fire Brigade sent eight engines and five fire rescue units.  London Fire Commissioner Ron Dobson said: "Firefighters worked tirelessly this morning to help the injured and rescue those who were trapped.â€