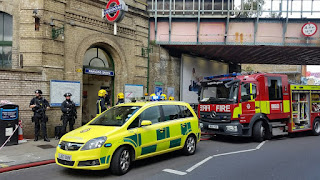 On Sept. 15, 2017, an improvised bomb exploded on a train at London's Parsons Green station, injuring at least 22 people.


``The Brigade was called at 0821 and firefighters were on the scene within three minutes. Fire crews assisted the London Ambulance Service in treating casualties on the affected train.

``Firefighters also helped evacuate 253 people from a train not involved in the incident.''