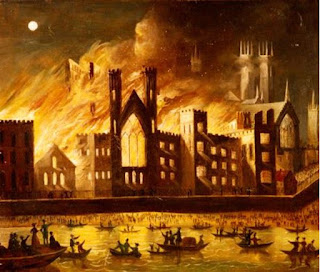 On Oct. 16, 1834, fire ripped through the Palace of Westminster, home of British Parliament.

The first hint of disaster was a burning odor reported at 4 p.m. Flames were visible by 6 p.m. and flashed over 30 minutes later, according to Wikipedia.

Two parish pumps were the first on the scene at about 6:45 p.m.

At 7 p.m., Superintendent James Braidwood of the London Fire Engine Establishment  responded with 12 engines and 64 firefighters.


I was called to the scene

of action about seven oâ€™clock, from observing a deep crimson hue in the sky, which pretty well indicated both the situation and magnitude of the conflagration, although there was a strong twilight at the time, and the moon was shining with great brilliancy.

arriving in Old Palace-yard, about half-past seven, I found the House of Lords, and suite of rooms facing the Yard, enveloped in one vivid mass of flame; the House of Commons soon after ignited; and the fire, fanned by a strong south-west wind, gradually extended to the Commonsâ€™ committee-room and waiting-room, &c.
Several engines had arrived, and were stationed by their foremen in Old Palace yard, as was supposed, under the idea â€œthat they could never be wrong when they laid their engines abroadside the burning buildings.â€

The water, though at first rather scant, was afterwards tolerably plentiful; the engines were well manned, and worked with great spirit, but their powers were for some time sadly misapplied.

the firemen mounted the portico in front of the building, pouring their jets of water upon parts that were in a state of most intense combustion, while it was evident enough to all but themselves,that they were exposing themselves to great danger without a possibility of being useful.

Several engines belonging to the London

Fire Establishment were in full work by half-past seven, when that from Watling-street station arrived, with Mr. Braidwood, the superintendent, who immediately commenced a survey of the fire, for the purpose of placing the men and engines under his command in the most advantageuos positions.

was not long in forming his â€œline of battle,â€ and all the force of the combined Establishment present, became actively engaged with their elemental foe.


after eight o'clock, the flames were advancing towards the square turret at the corner of St. Margaret-street, at the uppermost window of which several persons appeared, and in the most earnest manner implored assistance; two or three ladders were at hand, but they all proved too short to reach the window; a call was immediately raised for the brigade ladders, and it was most promptly answered.

Several lengths of scaling ladders were instantly brought to the spot, and the two first ladders were scarcely put together when Mr. Braidwood came up.

Length after length was added, until six had formed a ladder of the requisite height. The joining and raising of six ladders is a work of some minutes; while it was steadily proceeding, the most intense anxiety was depicted on the countenances of all the spectators, and when at length the ladder reached the window where the unfortunate persons were collected, a simultaneous shout of applause burst from the assembled throng.

The persons thus rescued proved to be Lord F. Fitzclarence and some soldiers; his lordship was the last to descend.

The promptitude with which the ladders were brought up, and the steady masterly style in which they were elevated, reflect much credit on Messrs. Adams, Carter, Elderton, Moore, and George and Henry Rose, who, under the direction and with the assistance of Mr. Braidwood, effected this movement.

These ladders were very extensively employed at this fire.

Long before eight o'clock great apprehensions were felt for the safety of Westminster-hall, and it at length became evident that the fire had extended so much in that direction as to place it in the utmost jeopardy.

To effect the preservation of this venerable building appeared to be a strong and universal feeling, and the most extraordinary efforts were made on its behalf.

Mr. George Colf (late foreman of the Alliance) of the Farringdon-street station, ran his engine into the body of the Hall, and was quickly followed by Mr. E. Bourne, of the Waterloo-road station; two other engines, placed in New Palace-yard, supplied the former with water.
The firemen ascended by means of a ladder to a lead flat outside the great window of the Hall, and kept up a continued deluge upon the flames.