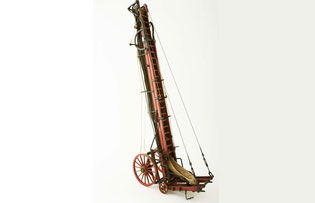 "It takes a crew of 4 to pitch the 135, where as the escape could (if the adrenaline was pumping) be slipped and pitched by one person, a crew of 2 was an easy job, and crews of 3 and 4 was luxury.
"My favourite command on the escape was 'take over number 4' because it allowed me (number 1) to size up the pitch while number 4 steered the escape towards the window.
"My other favourite was the command 'launch', this was when the escape was put back on the motor and the crew had to launch it onto the gantry so that the head lock engaged.

"Number 4 then had to hang on the escape to test if it was secure.

"Sometimes it was. Sometimes it wasnâ€™t, and number 4 would end up trying to stop Â¾ of a ton from rolling down the road.
Number 4 was also the person who had to run along the lengths of hose to make sure they were not kinked, run out the hydrant and before we had hand held radios, convey all the orders by running from number 1 to the pump operator (number 2) and then run back to repeat the order to ensure it was correct.

"The number always 3 stayed with number 1 at the branch.