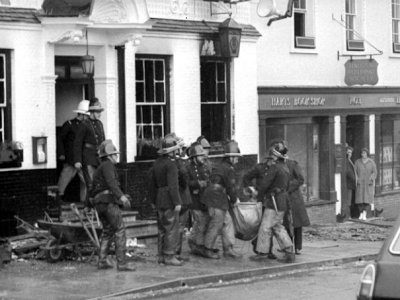 The aftermath
In the early hours of the day after Christmas 1969, fire swept a small hotel in Essex, killing 11 people. The blaze led to reforms in U.K. fire safety regulations.
From U.K. Fire Service website
The Rose & Crown Hotel in Saffron Waldron, Essex is a 16th century coaching in which was extended and modernised in the 19th century. It is in the centre of the town and faced onto the market square. The hotel consisted of floors and a basement. In the early hours of Friday December 26th a small fire, is believed to have started in a television set. This fire was to spread and eventually 11 people would be dead. The Hotel was full and had 33 guests staying, having just celebrated Christmas. The television in the hotels lounge had been left plugged in.
At about 01.30am two guests having smelt smoke left their rooms on the first floor to investigate. They discovered the fire in the lounge so left the building and attempted to call the Fire Brigade. At the same time a local passer by spotted the pair panicking with the location of fire. He took the phone from them and gave accurate details to the brigade control operator. The time was now 01.47am. He then ran to the Hotel and operated the fire alarm before assisting in the rescue of 2 of the residents.
The Fire Brigade responded quickly, the appliances booking mobile the incident at 01.52. This first attendance, the pump and Pump Escape from Station No 79 Saffron Waldron were greeted by the sight of the hotel well alight. They had only had to travel 200 yard from their fire station to get to the incident. As said above, 33 people were staying in the premises, 9 of which needed immediate rescue using the appliances wheeled 50 foot escape ladder, an extension ladder and a first floor ladder. Three guests jumped to safety and the two guests who had discovered the fire had also left. 5 other guests were rescued by locals who had arrived to assist the brigade. These people commandeered builderâ€™s ladders to assist in the rescues.
At 01.57am an assistance message was sent which read â€œMake Pumps 4, BA 6â€³. This was followed at 01.59am by a further make up message which read â€œMake Pumps 10, BA 10, Turntable requiredâ€
In the meantime BA crews had been ordered to search the rear of the building in a bid to find those guests still missing. The crew managed to search the ground floor, and first floor, but due to the severe conditions they couldnâ€™t proceed to the second floor. These crews were withdrawn and put to work assisting rescues from the front of the premises. Eventually having travelled a considerable distance other appliances arrived. The crews were ordered to assist in rescuing guests from upper floors at the side of the hotel. They were to help 3 persons escape to safety. Two men slid down from a 3rd floor window via a short pitched roof, then fell into the hotels yard. The sustained injuries as they fell.
As further assistance arrived, crews started to carry out a more thorough search of the rear area. Here they found 6 bodies. A further 5 bodies were found in rooms at the front of the building. These 11 guests sadly never escaped the fire. They were trapped by the heat and smoke. All of those who died were found on the 2nd and 3rd floors. They had died in the early stages of this fire as a result of a build up of heat and fumes.
The risk of death was increased due to other guests leaving doors or windows open in their bid to save their own lives. Leaving these open allowed heat and smoke to spread throughout the hotel far easier. Some fire resisting doors were fitted within the hotel, but the mechanisms used to keep the doors shut after use had failed allowing them to remain open. The fire alarm, even though operated at the early stage of the fire failed to continue to operate and warn residents of the unfolding disaster. It was found after the fire that the wiring to the alarm had been burned through in the early stages of the incident.
In total 12 appliances attend this incident. 12 jets were used along with a TL monitor supplied by 5 pumps set into 5 different fire hydrants to fight this tragic fire. This fire was one of a number of hotel fires which gave added impetus to the passing of the Fire Precautions Act in 1971.
In 1972, hotels and boarding houses were the first premises to be designated as requiring a fire certificate under the act.