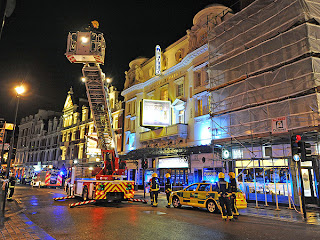 On Dec. 19, 2013, a section of the famed Apollo Theatre's ornate plasterwork ceiling collapsed during a performace.

The Apollo, located in London's West End, opened in 1901.

â€œWe believe around 720 people were in the theatre at the time. A section of the theatreâ€™s ceiling collapsed onto the audience who were watching the show. The ceiling took parts of the balconies down with it.

â€œFirefighters worked really hard in very difficult conditions and Iâ€™d like to pay tribute to them. They rescued people from the theatre, made the area safe and then helped ambulance crews with the injured.

â€œSpecialist urban search and rescue crews were also called to the scene to make sure no one was trapped. Fortunately all those who were trapped were rescued and treated for injuries or taken to hospital.'

"London Ambulance Service treated 76 patients, 58 of whom were taken to hospital to be treated for their injuries. Fifty one of these were walking wounded and seven had more serious injuries.

â€œIn my time as a fire officer Iâ€™ve never seen an incident like this. I imagine lots of people were out enjoying the show in the run-up to Christmas. My thoughts go out to all those affected.â€