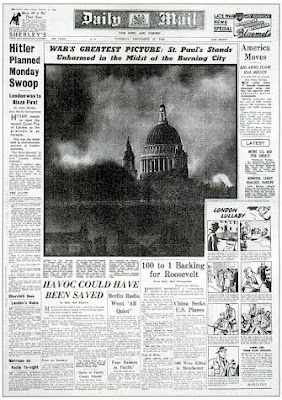 This famous photograph, St Paul's Survives, was snapped from the roof of the Daily Mail building by Herbert Mason.
On the night of Dec. 29-30, 1940, London suffered an inferno dubbed the Second Great Fire of London, timed by German raiders to coincide with low tide on the River Thames to impair fire fighting.

The destruction stretched south from Islington to St Paul's Cathedral, scorching an area greater than that of the Great Fire of London of 1666.

As the flames approached St Paul's Cathedral, a symbol of London's glory,

Prime Minister Winston Churchill called of the Fire Brigade and St. Paul's fire watch to save the landmark.
They did.
The Second Great Fire of London claimed the lives of
14 firefighters and injured 250 others.

Today a fire service memorial stands on the cathedral's grounds.

The firestorm destroyed 19 churches, 31 guild halls and ravaged Paternoster Row,
center of the London publishing trade where an estimated 5 million books were lost in the flames