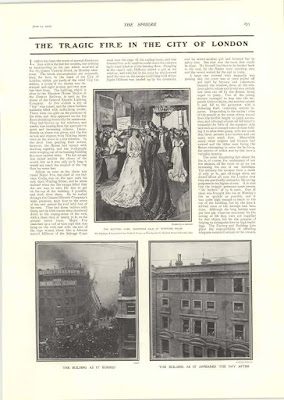 On June 9, 1902, fire claimed nine lives on Queen Victoria Street in the City of London. Escape ladders were too short to rescue people from the top floors, prompting pubic outrage.

A great and fatal fire took place at a warehouse in Queen Victoria Street in broad daylight on Monday evening.

The building, which is close to the Mansion House Station of the District Railway and only three hundred yards from the chief City fire-station, is used as workshops, offices, and stores by the General Electric Lighting Company.

When the alarm was given at five o'clock a number of girls were at work on the fourth floor, which the Watling Street fire-escape proved too short to reach.

Many of the girls leaped into a tarpaulin held out in the street, but when the fire had been got under and the fourth floor entered the bodies of eight girls and one boy were found in the ruins.

The firemen appear to have worked with the utmost gallantry, and in particular two women were rescued by splendid efforts on the part of the men of the Salvage Corps.

But the fact that the longest fire- escape available at the chief City fire-station was unable to reach the fourth floor of a London warehouse has created a very painful impression.

We do not wish to make any criticism in regard to individuals till after the inquest, but it is clear that the life-saving apparatus available at short notice in the City, with its lofty buildings, is at present by no means adequate, and must be made so without delay, â€”if, indeed, the whole Fire Brigade does not require reorganization.