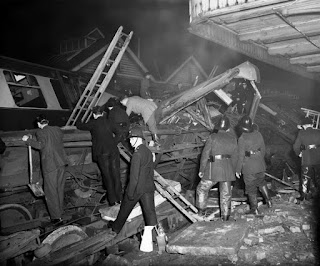 On Jan. 23, 1955, an express train plowed into the platform at Sutton Coldfield station in Birmingham, killing 17 people and injuring 25 others.

"The first carriage was crushed between the engine and the second carriage," The Birmingham Mail recalled on the 60th anniversary. "Another was knocked into the air, causing it to drag along the station roof."

The train from York to Bristol was traveling at twice the speed limit, the BBC said.

It had been diverted from its normal route.