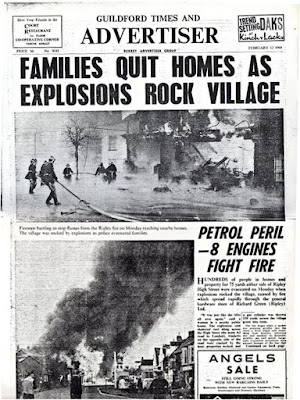 On Feb. 10, 1969, a fire and explosion at a hardware rocked the village of Ripley in Surrey.

"The explosions sent shattered roof tiling across the High Street, windows on the opposite side of the road were cracked by the heat, properties rocked, and a gas cylinder was thrown 150 yards across the village green into trees," the Guilford Times and Advertiser reported.

Firefighters from Guildford, Woking, Esher and Camberley responded to the alarm.

"The fire began while a tanker was pumping paraffin into the store; a store which sold everything from bicycles, television sets and crockery to furniture, paraffin, gas and petrol," the newspaper said. "Large-scale evacuation procedures were pursued because of the fear that petrol tanks would explode, the tanks being under the forecourt, and under the garden of an adjacent cottage of Mr and Mrs Charles Shoesmith, who were on holiday in Majorca."