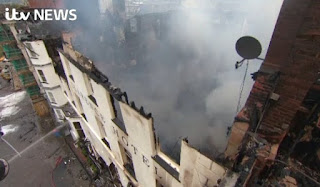 Flames started in an art gallery and spread to the hotel, The Guardian reported.

At the height of the blaze, the Devon and Somerset fire service said:

â€œBecause of the complex structure of the old buildings here we havenâ€™t been able to put firefighters on the inside, so weâ€™re fighting it from the outside.

â€œWeâ€™ve got the aerial ladder platforms so we are pouring water on top of it. We are trying to contain it but there are signs now of damage to the bedroom floors of the hotel.â€


The hotel - which escaped damage during World War II - was built in 1769 as the Assembly Rooms and in 1827 renamed the Royal Clarence after a visit by Adelaide, Duchess of Clarence, The Guardian said.