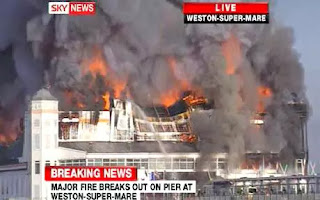 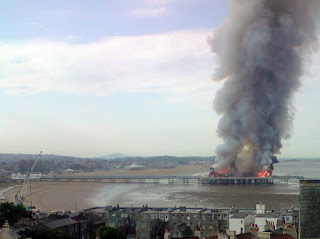 ``Robert Tinker, a Grand Pier employee, was later praised by the fire brigade as he braved the extreme intensity of the heat from the flames to rush around the side of the building to remove several gas canisters which had been stored within the premises, had these not been removed the fire brigade claimed that the blaze could have been much worse, with the possibility of local residents and traders needing to be evacuated.''

Exercise To Be Staged Near The Pier Head On Saturday October 19 Posted on 18th October 2013
Exercise To Take Place In Cunard Building Posted on 17th April 2013
Appeal after teenager is raped in Blackpool Posted on 02nd September 2014
Officer and member of the public jump into the Thames to save woman from drowning Posted on 05th August 2014
More fire deaths in London since 2008 despite fall in fires, say firefighters Posted on 24th January 2014
A WALK IN THE CITY Posted on 23rd January 2008
Greater Manchester Deputy County Fire Officer Jim Owen Honoured by Her Majesty the Queen Posted on 31st December 2014
Support Essex firefighters â€“ lobby your MP Posted on 23rd July 2012
Recalled dehumidifier causes house fire Posted on 30th July 2015
Essex fire crews vote two to one in favour of strike action Posted on 13th June 2012