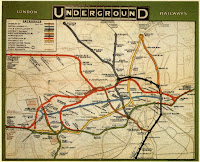 "The most serious fire which has as yet taken place in the network of the tube railways under London broke out recently about 25 yds. from the Moorgate st. station of the City & South London railway," the magazine Fire Engineering reported in 1908.

"Contrary to the inactive proceedings of our Interborough company, either on its subway or elevated lines, managers were at once dispatched along the line; the trains were stopped and the passengers sent to the surface.

"The electric current was at once cut off, so that no live wires or rails handicapped the firemen (wearing) smoke-helmets. Even with these on, they could not enter at Moorgate, the flame and smoke being so severe, and engines and men were dispatched to the stations at the Bank and Old street.

"The firemen soon had the blaze under control. There was a big crowd at Moorgate street station awaiting transportation: but no panic ensued and all the expectant passengers were taken up to the street by the elevators."

To Pleb Or Not To Pleb? That Is The Question Posted on 19th October 2013
Â£5 million cuts will devastate Tyne and Wear Fire and Rescue Service say local firefighters Posted on 17th January 2014
On This Day In 1988: Jumbo jet crashes onto Lockerbie Posted on 21st December 2012
ARE IDENTITY CARDS DEAD AND BURIED? Posted on 25th April 2017
1984 AND THE EQUALITY TREATMENT BENCHBOOK Posted on 28th December 2021