on the 01st September 2015 at 20:29 - Posted in Fire Blog Plumis Automist has been used to provide an innovative fire safety solution for the conversion of a stunning collection of Art Deco houses in Twickenham, midway between the River Thames and Twickenham stadium. The architects, ABA Group of Sunbury on Thames, were keen to preserve the period features whilst achieving the contemporary design they envisaged. The 8 2-bedroom houses all comprised a large, open plan reception room opening onto a kitchen at ground floor level with 2 large double bedrooms on the first floor. The proposed designs provided no separation to protect the escape route. 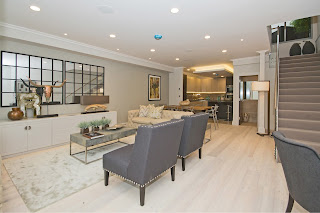 ABA Group Ltd worked with the appointed Building Control officers to meet the fire safety requirements of the Building Regulations but they were very anxious that the solution did not compromise the high-specification open plan design of the apartments. They discovered Automist and called in Bracknell-based Vapourmist, the accredited installers for the system who provided a design and install service.

Automist gave ABA Group a number of active fire protection options to protect the escape routes and aid evacuation for a fraction of the cost of a traditional sprinkler system. Patrick Amos, ABAâ€™s Director was pleased with Vapourmistâ€™s recommendation.  â€œAutomist gave us complete design flexibility and was simple to install as it could be connected to the domestic water supply. Because it requires much less water than traditional sprinklers, there are great practical advantages in the event of a fire because run off would be minimised and the high-specification fixtures and fittings would not be in danger of being drenched as would be the case with sprinklers. We will definitely consider the use of Automist in similar designs in the future.â€