on the 02nd September 2015 at 6:08 - Posted in Fire Blog Plumis â€“ Automist was installed by Mainpoint Fire Protection as a key part of an alternative fire protection scheme which was required because the refurbishment of a 1930â€™s factory into three buildings did not allow sufficient access for the fire brigade in the event of a fire. Building Regulations Fire Safety (Part B) Section 11, paragraph 2 states that: â€œThere should be vehicle access for a pump appliance to within 45m within the dwelling house.â€ 103 St Maryâ€™s Road in Oxford had been the boot repair department of Oxford Co-operative Society until it closed in the 1970â€™s. It remained derelict until SM Developments bought the building with a view to transforming it into 3 houses. The 2 dwellings furthest away from the entrance did not allow sufficient access to allow the fire brigadeâ€™s hoses to be extended therefore Oxford City Council Building Control officers stipulated the installation of a fire suppression system. 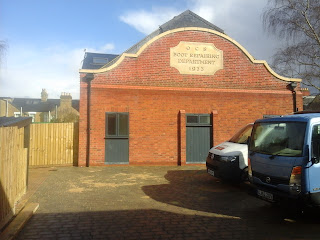 Steven Moss, the MD of the developer researched fire suppression on the internet and discovered Plumis Automist. He was pleased that Oxford City Council Building Control officers validated his choice by also recommending the innovative and highly cost effective product. He had no hesitation in contacting Mainpoint Fire Protection, Automist accredited installers who proposed installing 2 Automist pumps in both properties under the sink in the open plan kitchen/dining area and in an under stair cupboard. Automist uses a high pressure pump to generate a fine water mist from nozzles to suppress any fire. It is also extremely reliable because sensing is based on heat detection as recommended in Approved Document B, effectively eliminating nuisance alarms. It was installed with much less disruption and in a considerably shorter timeframe than fitting sprinklers. It also has the benefit of using less than 6 litres of water per minute per head compared with 65 litres per head used by sprinklers which reduces potential damage to the fabric and furnishings of the property in the event of a discharge and unlike smoke alarms Automist not only alerts residents to the fire but also suppresses it.

Automist is ideal for use in similar refurbishments where access for the fire brigade is restricted and it can be justified as a fire engineered solution, as it minimises fire flash-over by reducing temperatures and improves ambient conditions for fire-fighters.