on the 21st May 2017 at 22:29 - Posted in Fire Blog A Plumis Automist Smartscan system was installed recently in a loft conversion in Hitchin, Hertfordshire in order to facilitate the retention of the open plan living space. For this kind of contemporary, open space design Building Regulations demand that a protected enclosed stairwell is provided or they require the use of alternative compensatory measures such as sprinklers.

The property owner, Matt Newis was reluctant to install sprinklers because of the potential water damage to his home should the sprinklers be activated. He was recommended to consider the Plumis device and did some research on the internet. He was fully satisfied that it would fulfil his requirements as a more usable alternative to sprinklers, so he contacted his local approved Automist installer, Creative In/Exteriors Ltd. LABC registered Automist Smartscan is a modern alternative to a fire sprinkler system. Instead of the typical ceiling-mounted sprinkler head, this device consists of a wall mounted stainless steel panel that seamlessly integrates into the interior of almost any living space. As soon as the system is activated, the head of the unit rotates automatically to directly target fires with a powerful jet of water mist. This has been proven to achieve the same performance as the more familiar sprinkler systems. However, because this approach uses 90% less water there is significantly less water damage to the living space in the event of a discharge. 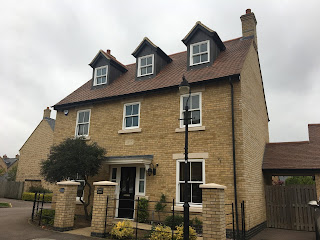 Automist also has the advantage of fitting unobtrusively into modern decors. In this case, the pump was located under the stairs and the spray-head on the staircase wall. A Kidde KF30 heat alarm complete with SMK23RU relay was installed and connected to the pump. The heat alarm was mains powered from an existing consumer unit, on a separate RCBO. This is effectively the trigger for the pump to activate. All plumbing work, electrical work and making good was completed by Creative In/Exteriors Ltd. The pump is connected to the existing consumer unit using FP200 cable and runs on a separate RCBO.

Mr Newis was pleased that Automist helped avoid the need to create an enclosed lobby to the exit from the bottom of the stairs, which exited at ground floor level into an open plan dining room and helped retain the open plan nature of the living space. He would most definitely use the Automist system again and indeed would recommend it to others.