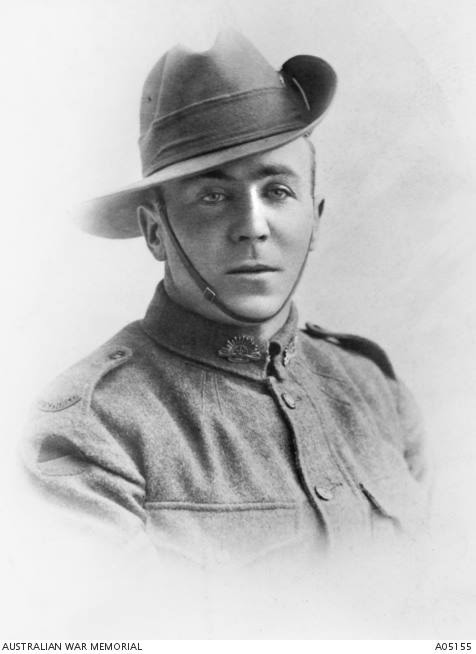 Sergeant Stanley Robert McDougall, 47th Battalion, Victoria Cross action at Dernancourt.
Stan McDougall (1889-1968) was born in Tasmania, and became a blacksmith. He enlisted in August 1915 and fought at PoziÃ¨res, Messines and Broodseinde. He was promoted to sergeant in January 1918.
At Dernancourt, when he saw the enemy knock out a Lewis gun position, he attacked two German machine-gun teams, killing their crews by "hosing" them with the Lewis. He then attacked a second wave of Germans, burning his hands on the hot barrel casing of his gun. When a German officer aimed his pistol at some Australians, McDougall killed him with a rifle and bayonet. Twenty-two Germans were killed and 30 were captured, largely as the result of McDougall's actions. Eight days later, at the same place, McDougall won the Military Medal, taking over the platoon when his commander was killed.
After the war McDougall became an officer with the Tasmanian Forestry Department, and later, while inspector-in-charge of forests in north-east Tasmania, performed outstanding work during bushfire periods. He died at Scottsdale in 1968.
Citations:
Victoria Cross
'For most conspicuous bravery and devotion to duty when the enemy attacked our line, and his first wave succeeded in gaining an entrance. Sergeant McDougall, who was at a post in a flank company, realized the situation, and at once charged the enemy's second wave single handed with rifle and bayonet killing seven and capturing a machine gun which they had. This he turned on to them, firing from the hip, causing many casualties and routing the wave. He then turned his attention to those who had entered, until his ammunition ran out, all the time fiing at close quarters, when he seized a bayonet and charged again, killing three men and one enemy officer, who was just about to kill one of our officers. He used a Lewis gun on the enemy, killing many, and enabling us to capture 33 prisoners. The prompt action of this non-commissioned officer saved the line and enabled the enemy's advance to be stopped.'
Source: 'Commonwealth Gazette' No. 150
Date: 24 September 1918

Military Medal
'For conspicuous gallantry and devotion to duty at DERNANCOURT South West of ALBERT on 5th April 1918 during heavy enemy attack, he took a Lewis Gun to a very exposed position where he could enfilade enemy at close quarters up to 30 yards. he maintained his gun until ti was pierced by a bullet, then crawled 300 yards, got another gun and returned to his post in "No Man's Land" where he was responsible for many dead. Later during our counter-attack he organised a platoon after the officer was killed and led them in the attack. He is absolutely fearless and his contempt of danger is amazing as right throughout his conduct has been of a similar high standard.'
Source: 'Commonwealth Gazette' No. 185
Date: 27 November 1918