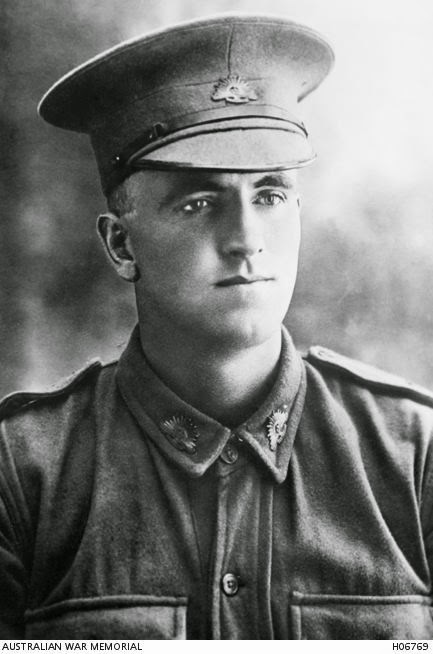 Born in , Claud Castleton (1893-1916) arrived in  in 1912 seeking travel and adventure. For three years he toured , the eastern states, and Papua. He was in  when the First World War began, but in March 1915 returned to  to enlist. He served on Gallipoli with the 18th Battalion and in March 1916 transferred to the 5th Machine Gun Company.

Castleton was killed at PoziÃ¨res on  during an action for which he was posthumously awarded the Victoria Cross. During a night attack on enemy trenches, the infantry was driven back and then held down by intense enemy machine-gun fire. Many wounded men were left lying in no man's land, and on two occasions Castleton went out in the face of enemy fire to bring in wounded men on his back. When he went out a third time, he was himself hit in the back and instantly killed. His body was later recovered and is buried in the main British war cemetery at PoziÃ¨res.

'For most conspicuous bravery. During an attack on the enemy's trenches the infantry was temporarily driven back by the intense machine gun fire opened by the enemy. Many wounded were left in "No Man's Land" lying in shell holes. Sergeant Castleton went out twice in face of this intense fire, and each time brought in a wounded man on his back. He went out a third time, and was bringing in another wounded man, when he himself was hit in the back, and killed instantly. He set a splendid example of courage and self sacrifice.'