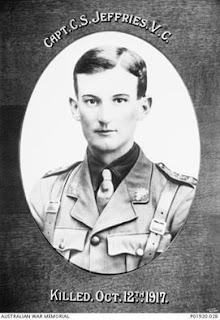 The 9th Australian Brigade suffered bitter losses in its ill-fated attack on Passchendaele on 12 October 1917. Before he became one of the officers killed there, Clarence "Jeff" Jeffries (1894-1917) had led attacks on German machine-gun posts, capturing several guns and killing or capturing their crews.

Jeffries was just 22 and his family was well known in the Newcastle region, where he had been a mining surveyor on the state's northern coalfields. After the war his father went to Belgium and for a while personally led an ultimately successful search for his grave.

'For most conspicuous bravery in attack, when his company was held up by enemy machine gun fire from concrete emplacements. Organizing a party, he rushed one emplacement, capturing four machine guns and 35 prisoners. He then led his company forward under extremely heavy enemy artillery barrage and enfilade machine gun fire to the objective. Later, he again organized a successful attack on a machine gun emplacement, capturing two machine guns and thirty more prisoners. This gallant officer was killed during the attack, but it was entirely due to his bravery and initiative that the centre of the attack was not held up for a lengthy period. His example had a most inspiring influence.'
Source: 'Commonwealth Gazette' No. 57
Date: 18 April 1918