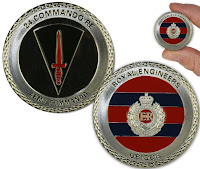 While no one is really sure where the challenge coin started, it is generally agreed that it originated in the American military. The tradition is to ensure that all the members of a certain unit have their coins. If they do not, a round of drinks is bought by the person without. If everyone present has their challenge coin, then the challenger has to buy the round.
The History
The popularly held belief about challenge coins is that they originated in World War One. It began with a rich American student who enlisted in the Army Air Corps as a lieutenant. He ordered small coins plated with gold and embossed with the emblem of their squadron to give to his colleagues as a memento of their service. One member of the squadron had never owned anything so valuable, so he kept it in a small pouch around his neck. When this pilot was involved in an aerial dog fight, his plane was damaged and he was forced to land behind enemy lines, where he was captured by the Germans. While they confiscated all his other personal belongings, they missed the pouch containing the coin. When they were transporting him to a prisoner of war camp, he was held in a French village overnight. The village was bombed by the British and during the confusion, the pilot was able to escape. By wearing civilian clothes, the pilot managed to avoid recapture, but on making contact with French patrol, he had no way of identifying himself as an ally. However, as the French soldier prepared to execute him, he pulled the coin from his neck, showed the American flying squadron insignia and managed to save himself. On his return, he told his story and it became tradition for members to carry their coin, and challenge each other on possession of it.
Rewards and Awards
Coins can be bought by members of the unit, or they are awarded them for outstanding service or going above the call of duty. They are used to boost morale and camaraderie, a tradition starting in the Vietnam War, but they did not gain real popularity until the early nineties in the first Persian Gulf War.
Challenge Coins Today
The Challenge Coin is popular in the British military too, as well as in organisations outside of the military, such as Eagle Scouts, NASCAR and police and fire departments. They are available online to order from retailers such as RV Ops military supplies and other army surplus and supply shops.