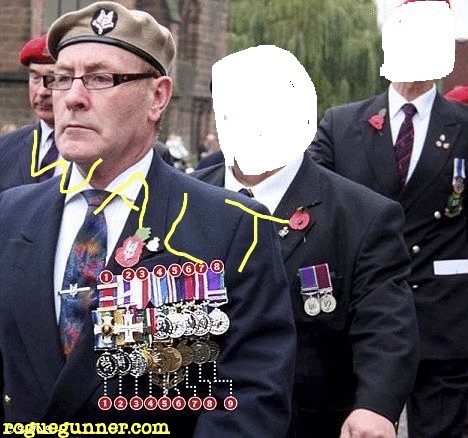 SAS fantasist Roger Day has caused outrage by selling his fake medals on eBay for Â£386. Day aroused suspicion last November when he attended a Remembrance Day parade wearing an impossible array of 17 medals and an SAS beret. But the 62-year-old, who works as a carpenter, has now sold the 'famous' medals for Â£386 - an average of Â£22.75 each. The medals were purchased by Day's fourth wife Maxine Bunyan, 38, who fell for him after he lied about being a decorated war hero. Selling them on his behalf, Ms Bunyan boasted about her husband's notoriety to attract eBay bidders. Advertising the medals as 'Militaria', she wrote in the item description: 'These are the actual medals worn by Roger Day at the Bedworth Remembrance Day Parade on 11th November 2009, as seen in most of the national newspapers and TV etc. 'These medals were all purchased by me (his wife) over a period of about 2 years and cost over Â£600 in total. 'The DSO alone was Â£150 as it is a 'dual face', i.e it has the enamelling and proper emblems on both sides. Maxine, who bought the medals for her husband after he told her an elaborate story about how he lost them, also boasted that the medals were 'replacement quality medals not cheap copies.' She added: 'However, they have cost me a great deal more than just money and so I am keen to get rid of them.' Yesterday, many war veterans called on Day to donate the cash to charity while the Royal British Legion branded him 'an utter disgrace'.Read More HERE

The good thing about all of this is this nob head will hopefully never again pretend he was a soldier, I just hope that some other Walter doesn't buy the medals on e-bay. Roger Day is obviously psychologically disturbed , perhaps he lost out on being a milk monitor while at school?