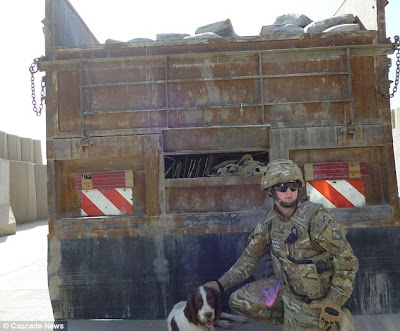 An ex-soldier who risked her life detecting explosives in Afghanistan has been left homeless. Private Lauren Dobbs, 23, who was a military dog handler, has been denied council housing, despite David Cameron's pledge to give higher housing priority to former armed forces personnel. Instead she was offered a bed at a night shelter - but only if the temperature falls below freezing.Private Dobbs said: 'I think it is just ridiculous - I am very annoyed but there is nothing I can do. 'It is completely unfair. I have colleagues in the Army who have had to rejoin, or have not been able to leave, because they have not been homed.'Private Dobbs spent six years in the Army, and was a military dog handler in the Vet Corps - a job involving handling specialist dogs capable of detecting arms and explosives. Six months after leaving the armed forces she claims her plans for a new independent life are being scuppered by the failure of Bromley Council, in Kent, to find her a new home. Read More HERE


Another case of a former soldier being let down by her Government whether it be Conservative or Labour, they are all the same. Lauren would have been better served by travelling to France then hiding herself in a lorry heading for UK, once she gets here, tell everyone she is an illegal immigrant and her housing needs would have been sorted immediately, she may have been given a Mansion to live in? Like the rest of the British people she is a second class citizen.