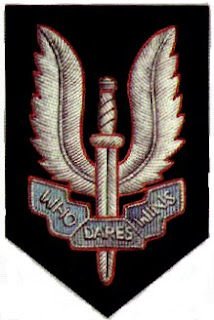 THE Special Air Service planned to mount a raid on Argentina by submarine in order to destroy the Argentine navy's stock of Exocet missiles, according to a new book on the Falklands conflict. Argentina was known to have bought five Exocet missiles from France before the outbreak of hostilities in April 1982. Two were used in the attack on the destroyer Sheffield, which alerted the British to the Exocet threat, and Task Force commanders were desperate to destroy the remainder. The submarine raid came about after the decision to scrap Operation Mikado, a plan to land a detachment of SAS in two RAF Hercules at the Argentine airfield at Rio Grande on Tierra del Fuego, where the Exocet-equipped unit was based. The aim was to destroy the missiles, the five Super Etendard aircraft that carried them, and to kill the pilots. According to Task Force, which reveals for the first time the full details of Operation Mikado, British commanders then devised a fresh plan using the Royal Navy submarine Onyx to infiltrate the SAS into Argentina. By that point the British had suffered another critical loss to the Exocet in the shape of the container ship Atlantic Conveyor and her cargo of heavy-lift helicopters.A successful attack on Hermes or Invincible, the two carriers at the centre of the Task Force, could have spelt the end of the operation to recover the islands. Under the plan, two dozen SAS troops were to be taken by Onyx to the coast of Tierra del Fuego, before rowing ashore in Gemini rubber boats. Read More HERE