The man who keeps a Harrier Jump Jet in his garden: Builder buys Falklands warplane on eBay 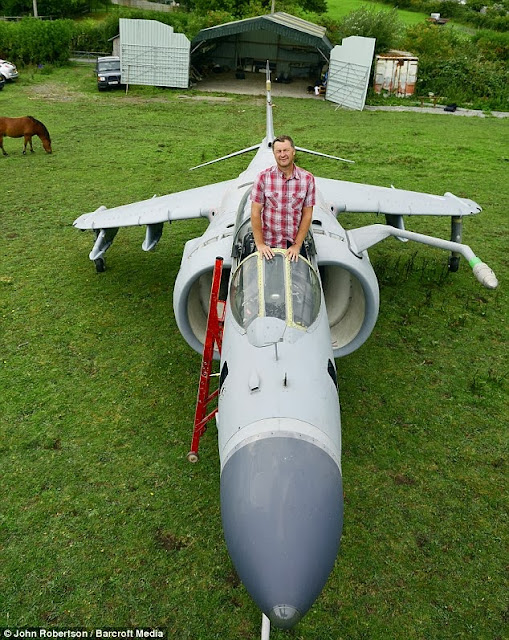 When it comes to middle-aged men and their pet projects, a Harley-Davidson or even a lawnmower will normally suffice.
But not for builder Neil Banwell who has spent the last six years repairing a Falklands Sea Harrier he secretly bought on eBay without telling his wife.
The 45-year-old paid Â£10,000 for the iconic fighter plane which dropped cluster bombs during the conflict with Argentina in 1982.He now estimates the jet he bought in 2007 is worth up to ten times what he paid for it but he does not want to part with it.Mr Banwell said his wife Jo, 49, was livid when she found out he had bought the plane without telling her.'First of all she was a bit shocked and said "what have you done?". Now she has grown to love it,' he said. 'It was a spur of the moment thing but hopefully it has been a good investment.'
He added: 'I saw the Harrier advertised on eBay. Iâ€™d never been on the site before but me and my daughter put a bid on it and actually won it the same day. Read More  HERE

BOYS WILL PLAY WITH THEIR TOYS.