The soldiers of B Company, 2nd Battalion The Royal Gurkha Rifles (2 RGR) enthusiastically celebrated the Hindu festival of Dashain earlier this week, at Patrol Base Chilli, near Helmand’s provincial capital, Lashkar Gah. 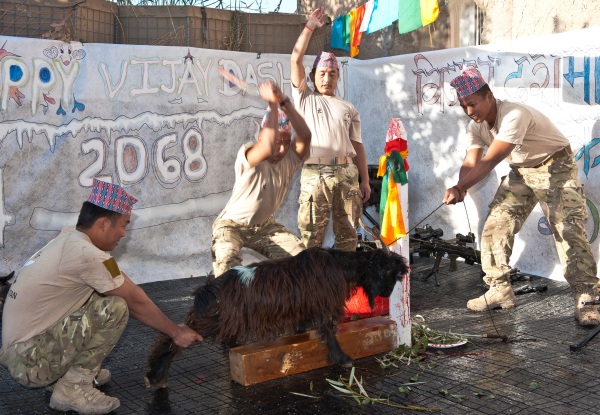 Dashain is known as the largest and most important religious festival of the year in Nepal, homeland of the Gurkhas. Report by Petty Officer 1st Class Kurt Wesseling III, US Navy/ISAF.

Major Jamie Murray, Officer Commanding B Company, said the point of the ceremony is to honour the Hindu godsâ€“particularly Durga Mata, the goddess of war.

“What the Gurkhas do in this instance is pay their respects to that goddess and therefore bless and hope that the Battalion is blessed as a result,” he explained.