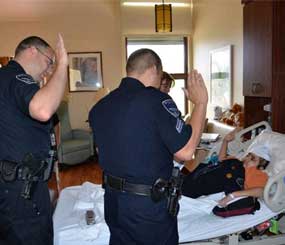 I came across a lovely story over at the PoliceOne.com website today.

Jose Rubio-Pavon, aged just 12, is dying with an inoperable brain tumour in Colorado. His dream was to be a police officer.

Jose’s dream came true last week when he was sworn in as a Brighton PD officer.

Officers Anna-Marie Cuney, Levy Slagle and Cpl. Monce Portillo swore him in during a ceremony in his hospice room and presented him with a certificate officially recognizing him as a member of the Brighton Police Department, a police uniform shirt and a junior officer badge.

The fifth grader wore a giant smile as he took the oath of office, Brighton Police said.

Sometimes I love this job.