12-year-old Cory Green of Flora, Indiana, was a Cub Scout who loved and admired the US Marines.

He never had a chance of enlisting, though. Cory was diagnosed with leukemia as a baby. He fought his way to three remissions, but was finally struck with a deadly infection he couldnâ€™t beat. Some Marines who knew Cory decided that for the way heâ€™d fought for his life with such courage, strength, honor and humility, he deserved to be part of the Corps. So they presented him with navigator wings, and made him an honorary Marine. But the story doesnâ€™t stop there.

When the end was near, Coryâ€™s dad called Sgt. Mark Dolfini, to let him know. Sgt. Dolfini said he didnâ€™t know what he would say or do, he just had to go to the hospital. He found Cory unconscious, and decided that as long as Cory remained alive, he would stand honor guard outside his room. And there he stood for eight straight hours until the little Marine passed away.

We are so moved by the courage of Cory Green, and the honor, decency and immense hearts of the incredible people who wear the uniform of the United States Marines. 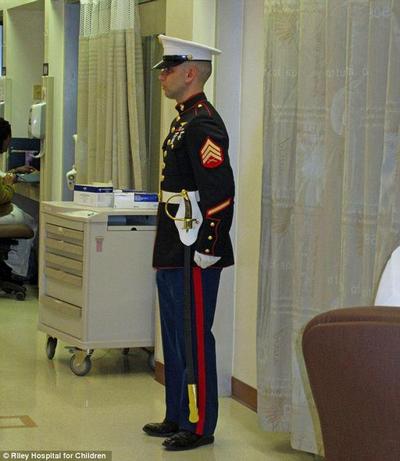