Your Council | Your Money | Your Choice

on the 13th December 2013 at 8:57 - Posted in Police Blog Buckinghamshire County Council debated their budget for next year a few days ago. This was following a widespread consultation on the council tax budget and precept. Here is the front cover of the report of that consultation (with some added highlighting from me): 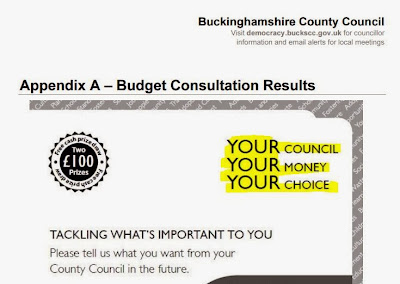 Inside, you can read the results. Here is one key extract (with my added bold):

Now contrast this BCC Cabinet meeting - you can see the webcast here. The final final decision has not been made on the budget but... the debate included this comment that the consultation was "the most extensive piece of research we have done our budget" said the officer (Sarah Ashmead) with affirmation from Cllr Tett, leader of the council. "Very interesting that about 50% of respondents have gone for that" [option for higher than 2% rise] he later says.

Later Cllr Janet Blake says something like "we are going to have a bit of problem explaining to the public why we are not going to do it" [go to a referendum] and the "condition of the roads is enough to kill the economy".

But you can guess what the decision finally was... it was not to go for a referendum. In other words not to recognise that the council is our council, spending our money based upon our choices. (Cabinet agenda and papers are here.)

Maybe when I have the time I might listen to the whole debate and be persuaded by the earnest statements around the cabinet table as why a referendum is not appropriate despite the results of the consultation... or maybe not.

But it is comforting at least that Buckinghamshire County Council has this strapline:
Your Council | Your Money | Your Choice
...

UPDATE 131213|0845: Just to add a little more information
During the debate (which you can see via the webcast), it was revealed that a referendum would cost Â£600k (half on the process and half on sending out new council tax bills if the vote went against the tax increase). This should be balanced against the extra Â£4.5m to be spent on improving the County's roads which would come from the extra 2% on council tax that would be subject to the referendum.
I would also suggest that taxpayers should factor in the cost of pot holes to their cars, vans and lorries. A 2% increase in council tax (for a band D property) is under Â£22 a year. How much does a new tyre cost? What about a new axle?