on the 20th February 2014 at 9:02 - Posted in Police Blog Towards the end of June, Emma Daniel has organised a get together (a mix of Tedx & unconference) with the purpose of "generating conversations about policing in a social era". You can find more here. I plan to be there.

I expect that those attending will be active users of social media, may well have written about social media and its implication for daily living / professional practice and will, of course, have an abiding interest in all matters relating to police work, justice and community safety. And there may even be some people who don't fall into any of those categories! Although be warned, unconferences aim to engage participants not merely lecture to passive audiences (as this blog outlines).

Emma has been seeking people to write blogs in order to help build the buzz for this event and I am happy to oblige being a dutiful British citizen.

...
As I have already blogged, I was approached the other day by the Deputy PCC for Thames Valley asking for my advice on how to engage young people. An easy start is just to Google 'engaging young people uk'. I got 'about 32,900,000 results in 0.42 seconds'. So there are lots of resources out there to advise. But I suspect they all take time, planning, money, commitment to listening and, probably, humility. But it can be done. (And I suspect there is at least one person in the Thames Valley Police who knows a lot about engaging with young people...)

My basic advice to the Deputy PCC, that night, was that you have to go to them, where they are. His immediate reaction was to look anxious and say that they could not possibly visit all the youth clubs and schools and so forth. I breathed in and said, he didn't have to, a fair few would be sufficient to get some real insight.

But had our conversation gone on longer, I would have been wanting to talk with him about social media and how many young people live a good chunk of their lives online. (As do many of us.) Going to where they are, means going online. It also means interacting online.

I have just checked out the @TV_PCC timeline over the last couple of weeks: it is all either announcements or retweets of announcements. I don't observe any dialogue with anyone on this account. Here is the tweet of the event I attended: 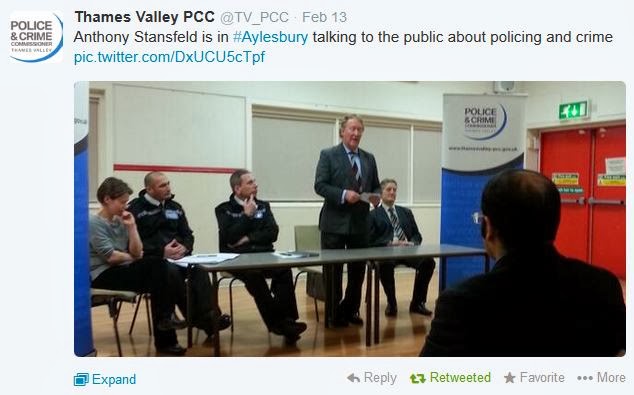 And note the words: "talking to the public". Not with, or listening to etc. And the whole room arrangement speaks volumes as well. If I had been there first, I would have put the chairs in a circle.

But back to social media: there is so much to learn. But you have to engage. You have to listen. You have to really, really want to hear what people are saying.

So my topic for the event in June is: How do you get people (involved in policing etc), who don't get social media, to get it?
(Bit of a rambling rant, Emma, but I hope it will do!)

UPDATE 0902 | 200214: just spotted this story via @SteveBachelder's scoopit: Meet the teenage crime commissioners working with West Midlands Police - note that they were elected too.