The lost domains of UKIP

on the 06th January 2015 at 13:25 - Posted in Police Blog Rumours have been circulating on twitter that UKIP has lost control of its prime website: UKIP.org after @Ilovealcopos bought it... Although it now seems that UKIP, by now, have regained control..? But I will be watching this space.

Meanwhile, I got to wondering, if UKIP can be so cavalier about their domain name, what other domains could they just happen to lose if they were in government? Gibraltar? Wales? The Isle of Wight? Pimlico?

So I went onto the #Whois website which lists who owns what IRLs and looked up UKIP.org Interestingly, the first time I looked, it was still saying it was up for sale:

But then I scrolled down to look at the website definition: 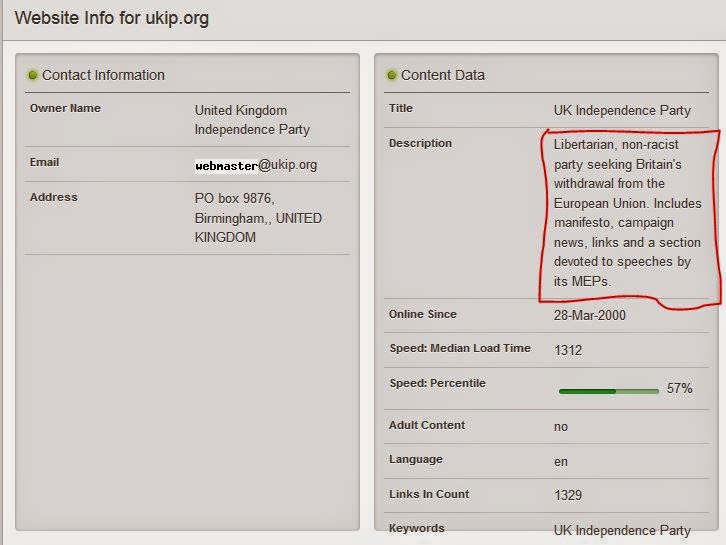 I will print this out in big letters:

So the MPs speeches don't have a section then. Seems a bit of shame. But, what other party has to declare itself to be 'non-racist'? Even the BNP describes itself as

The British National Party is the only party which opposes mass immigration and surrender to the European Union. Unlike the other parties, we mean it when we say it. The BNP has a range of sensible policies covering every aspect of British society.

(I love the fact that they feel obliged to say they have 'sensible' policies...! And by the way, none of the BNP domain names are up for sale)

But back to UKIP, why do they feel obliged to declare themselves to be a non-racist party?