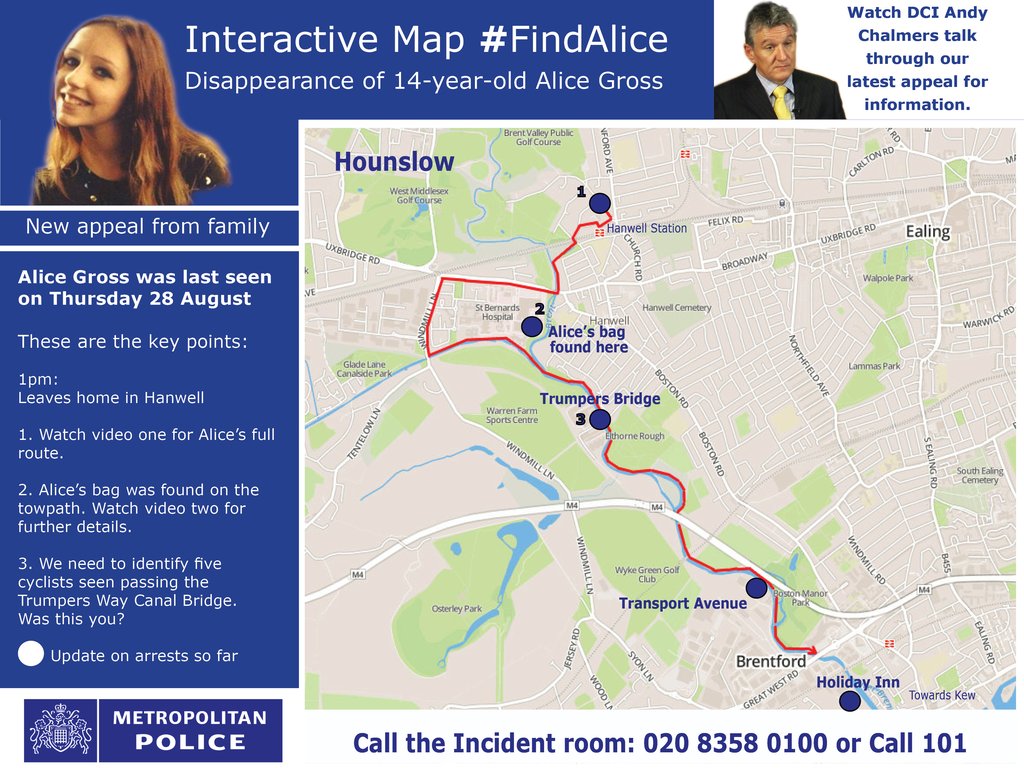 Detectives are asking for the public’s help in their continued investigation to find the missing teenager Alice Gross.

Alice went missing two weeks ago today, on Thursday 28 August, and has not been seen since.

Detectives have pieced together the last known sightings of Alice on that Thursday from CCTV, but they still have not heard from any witnesses who actually saw her after 1630 that day.

The team urgently needs to hear from anyone who saw Alice between 13:02hrs, when she was in Church Path, and 16:26hrs when she was walking along Trumpers Way, towards Hanwell.Â  So far no CCTV has been traced that shows Alice after this time.

Alice’s rucksack was found by police on Tuesday, 2 September in the undergrowth on the footpath that runs beside the River Brent between Hanwell Bridge and the Grand Union Canal.

“Today I am asking for some very specific help from the public.Â  We know that Alice’s bag was first found the day after she was last seen by two builders, who we have spoken to, who put it back down in the same spot on the towpath.Â  What we do not know is if anyone saw or found Alice’s bag between when she was last caught on CCTV and when the builders found it.

“In that bag was a pair of Vans trainers, which we think she was wearing when she left home, underwear, her lunch box and the rubbish from her lunch.Â  We also know that Alice’s iPhone was last used to send a text to her Dad on that Thursday.

“I need to know if anyone found Alice’s bag before the builders and was anything taken from it, or if anyone has her iPhone.Â  Did you find or see a white iPhone 4s with a cracked rear case, that Alice had decorated with marker pen? If you did do you still have it?

“I can assure you that if you did or you know someone that did, you are not in trouble, but you may have vital information that can take us one step further to finding Alice.

“There has been speculation that a family disagreement sparked Alice’s disappearance.Â  It didn’t.Â  Alice went out that day just like usual.Â  Her family are distraught.Â  Their daughter has now not been seen or heard from for 14 days.Â  Please help us find Alice and bring her home to them.”
Alice’s family, said:

“We all dearly love and miss Alice, not only her whole family but also her friends, teachers and the wider community.Â  The past two weeks without her have been heartbreaking.

“Alice if you see or hear our appeals please let us know you are ok. We think about you constantly and are desperate for you to come home.

“If anyone has any information about where Alice is please, please contact the police.”

When Alice left home, she was wearing dark blue jeans and a grey top. She was carrying a dark rucksack and may have been wearing denim blue ‘Vans’ shoes and tartan-framed glasses.