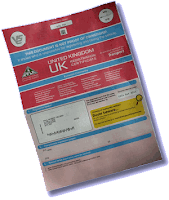 It was all going so well. I'd been renewing my tax disc online since DVLA made it possible. Fast, efficient service...while it lasted. Then I bought a car that was registered in Northern Ireland. I decided to keep the registration number as I'd never had one with a Z in it before. I was told it was a simple task to retain it. A tick in a box.

All forms were completed and posted off by myself and the garage I bought it from to register my acquisition and get a new V5. They were all returned to me with a letter saying that the DVLA doesn't do Northern Ireland and that I'll have to post it there. `Funny`, I thought, `Isn't Norn Ir'n part of the UK?`. Never mind, I'll take their advice and send it off to N.I. Ten days later back it all came with a letter saying that N.I. doesn't do it and to send the papers to my local DVLA office, so off it all went to Ipswich. Hurrah, ten days later my new V5 (log book) arrives. End of? Nope.

Eight months later I get the re-tax reminder form telling me that my road tax is due, so I go online, fill all the boxes and pay for my annual road tax just like I always have. But this time I didn't get the disc within the usual 5 days. I waited a couple of weeks and then phoned DVLA at Swansea. It seems that they sent the tax disc to my old address and it had been returned to them marked `no longer here`. The lady was very helpful (and Welsh) and said she could see what had happened and arranged for me to be sent a duplicate. Ten days later what I received was another V5, so I now have a spare log book but I can't display it on the windscreen as it causes a serious obstruction to my forward vision. I phoned again and explained that I already had a correct log book as well as the one they'd just sent me but that I still did not have a tax disc to display. The nice young lady, well on the ball (and Welsh) said she could see the mistake and would arrange for a duplicate to be sent. I asked about the two log books and was told to destroy the oldest one. They both look identical and brand new to me so I shall try and work that one out.

Another ten days has elapsed and I am still unable to display a current tax disc. Thankfully, they told me on the first occasion I phoned that I'm shown on the computer as having paid. I'm just about to phone them again. I'm tempted to ask them, in an Ali G style, "Is it because I is not Welsh?"