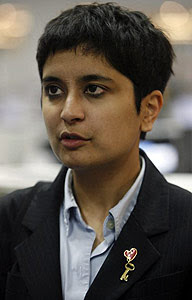 One wears a dirty uniform, the other a clean suit.
One works in unbearable heat, the other an air conditioned office.
One is thousands of miles from home, the other on her doorstep.
One is on low pay, the other is on a high wage.
One dodges deadly bullets, the other dodges phone calls.

You watched Shami Chakrabarti's emotional plea on Question Time this Thursday, and to tell the truth you were embarrassed for her. In your opinion she attempted to win the audience over using inflexions, emotions and raised voices.

Why did the the audience agree with her, were they not watching the News on the 7th of July 2005? You've never been a fan of Geoff Hoon, but he offered a voice of reason, calm, cool, collected, in response to what may have been an attempt to create mass hysteria.

Chakrabati would most likely be singing a different tune if the sound of dyeing children were within her earshot, then it may hit home that terrorists are not people, they are parasites. While she sits in her safe, expensive, air conditioned office, she should think about British Troops, in 40 degree heat, trying to survive.

Betraying principles, in times of strife.....
Five Royal Marines charged with murder.....
Peace in all time......
The military question...
The kangaroo court?