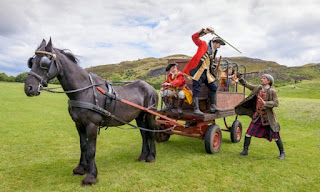 Over on the Twitters a debate has opened about the upcoming #AUOB march in Edinburgh and the 'use' of Holyrood Park.

I'd quite like to add my two penny worth.

Firstly, it's clear by my political party membership that I endorse the general theme of promoting self-determination and independence for Scotland.

Secondly, marches, demonstrations, and meetings are the life blood of political movements and a part of open democracy, even if the participants are in your view a collection of.... (add your own epithets).

Whilst the anticipated attendance may be considerable, it is unlikely that the marchers will constitute in themselves any challenge to the authorities other than traffic management and the monitoring of those undemocratic few who vehemently oppose these marches. If previous city marches are anything to go by, it will be the content of the banners at the front of the parade that will upset some and I get it. Calling Tories 'scum' is almost as bad as Ian Lavery calling for all 'Nationalists' to be killed off. It does nothing to further your cause because believe it or not we still have to live amongst those who disagree with us and those who don't give a flying fig.

Historic Environment Scotland, a public body, have decreed the march as 'political' and as such have imposed conditions on the 'assembly' of walkers on 'their' territory.

I will start by throwing in a curve ball to the shadowy organisers of the march and ask 1) Is/was an alternative assembly/'debrief' locus considered? 2) How much notice was given to HES?

'Political'?  An interesting distinction made here given all the other events held in the park, some which others might call 'political' in nature.  Also somewhat bizarre given the proximity to two pillars of political establishment in Scotland/UK in the Scottish Parliament and Holyrood Palace. I could argue, and indeed have, that preventing such expressions of nationhood or constitutional aspiration is natural and that preventing or restricting same is tantamount to supporting the status quo, which in itself is a political position. I'll leave that there.

HES have 'allowed' the march to use its road and path network. I should hope so as they have no right to prevent such access unless damage is caused. Just because folk arrive in thousands, waving banners and making a noise does not trump the right of access guaranteed under Scots Law. Imagine a collection of ramblers being told to foxtrot oscar. Would not happen. Rightly so.

HES have denied the installation of stalls, portaloos etc. Fair do as this is technically encampment and covered under some very old Trespass and some not so old Land Reform legislation. However, some rethink about loos might be welcome.

If the stalls etc. remain banned under the 'political' reasoning, be sure the future use of the park will come under intense scrutiny and let's remember who actually 'owns' the park.

As a footnote many will remember the caravan and tent 'Yes' encampment at Holyrood. Again a shadowy group, with a lot less endorsement, and I wonder if their protest was a vote winner in all honesty.  It looked shabby to me. The Holyrood Park 'furore' looks similarly manufactured to me. If HES want to win support, approval for loos might be the way forward, because otherwise civil disobedience may be the only way to resolve the matter and that will not be a good look for anyone.

BTW - Trident renewal is an anachronistic and abhorrent aberration.
Feel free to spread the joy by joining the SNP today.
Saor Alba.