on the 22nd November 2013 at 12:01 - Posted in Police Blog
Investigation underway after a bag containing thousands in banknotes is discovered 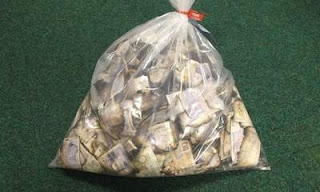 Police have appealed for information after a dog walker found hundreds of thousands of pounds in banknotes floating down a river.

The walker alerted police to the cash in the South Drove Drain near Spalding town centre, Lincolnshire.

Officers said a large amount of the money was water damaged but a good quantity was still in good condition.

"It isn't every day that an amount of money like this is found and somebody must have information that will help the police trace the lawful owner," said Detective Constable Steve Hull of Spalding CID.

A forensic examination has been carried out on the notes and police have been granted a seizure order by the Magistrates Court to investigate its origin.

It is understood the Bank of England will assist in the investigation and final money count.

If no owner is found, the money will become the subject of a further court forfeiture order.

Article courtesy of  Ananova and www.policeoracle.com