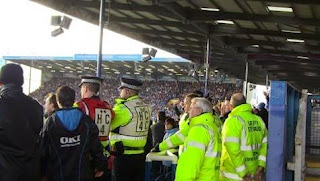 Six police officers from across the UK will head to Brazil during the World Cup to ensure a safe and trouble-free tournament. The UK plans to send six police officers to Brazil during the 2014 World Cup to offer support and advice to Brazilian police and local authorities. The team in the South American country will be led by Chief Superintendent Rachel Barber of South Yorkshire Police, supported by the national police lead on football, Deputy Chief Constable Andy Holt who will act as Gold commander based in the UK. Ch Supt Barber will be joined by deputy director Roger Evans from UK Football Policing Unit, Bedfordshire PC Chris Hawkes, GMP PC Ashley Keyte, West Midlands PC Stewart Bladen, Hampshire PC Paul Foley and Norfolk PC Andy King. The UK policing delegation will remain in Brazil as long as the England team is in contention. DCC Holt said: â€œBritish police are among the best in the world at policing football matches and it is testament to their work with supporters groups and others involved in the game that serious football violence has declined. At the last World Cup in 2010 there were only seven arrests of England fans, none of them for football-related violence." As reported on PoliceOracle.com, the policing operation during the last competition in South Africa won significant acclaim. A combination of a strong message to fans and effective enforcement of Football Banning Orders with operations at airports saw an effective clampdown on disorder. The action included an action at Southampton Airport led by Superintendent Ricky Burrows, an authority on football policing at Hampshire Constabulary. DCC Holt said his team would again be encouraging fans to look after themselves and there would be a fresh campaign to target those subject to Football Banning Orders, encouraging them to surrender their passports to police stations as required. He added that there would be "a firm but friends policing operation" during the World Cup in the UK, with a particular focus on preventing alcohol related disorder. Article courtesy of Alex Iszatt - www.policeoracle.com