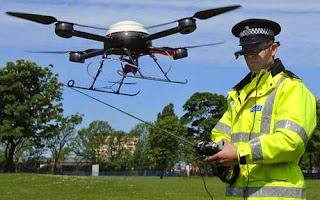 Recipients of this years' must-have Christmas gift are warned that the misuse of a UAV constitutes a criminal offence.Police are anticipating a rise in offences committed by drone operators as the device soars in popularity. It has been estimated that the number of Unmanned Aerial Vehicles (UAVs) in the UK has approached 50,000, after it was named one of this years "must have" Christmas gifts. Concerns for safety, as well as privacy, have been made as the accessibility of Unmanned Aerial Vehicles has risen in recent months. Police now want to ensure that the thousands of new users are aware of existing legislation governing their use. Drones were described as last years' must have Christmas gift and can be purchased for as little as Â£30 online. There is also increased regulation on drones that are equipped with video recording facilities. Users of drones with cameras are banned from flying them within 150 metres of a congested area or a large gathering of people. Flying one within 50 metres of a "vessel, vehicle or structure" that is not owned by the operator, or close to sensitive areas such as airports and military bases is also prohibited. So far the Civil Aviation Authority (CAA) has had two successful prosecutions resulting from drone misuse and have another five investigations pending. The first successful prosecution happened last year against a man in Cumbria who flew one over a nuclear testing facility in Barrow-in-Furness. Recently, a senior Met officer warned that to fly the devices in central London would constitute a criminal offence. Chief Inspector Nick Aldworth from the Met's Specialist Operations unit said: "I compare them to cars. They are perfectly legal to own, but it is very easy to break laws when you are driving." He added: "One of the challenges is to get people to realise what is legitimate and what is stretching the boundaries of law. The message is do not bring these machines into Central London, if you do you will be committing an offence." Only last month a passenger jet at Heathrow Airport was involved in a "near miss" with a drone has prompted the CAA to remind owners of existing regulation. A Civil Aviation Authority spokesman said the breaching specific drone regulations is illegal under the Air Navigation Order, but if a member of the public was harmed as a result of irresponsible flying - it would soley be a police matter. Article courtesy of Scott Docherty - www.policeoracle.com