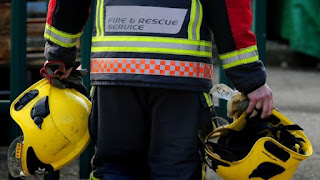 Picture courtesy of the Press Association.Plans to allow fire and rescue services in England to be overseen by police and crime commissioners have been called "dangerous" by the Fire Brigades Union. The Home Office is due to take control of fire and rescue policy in 2016, with the government consulting on emergency services working together more closely. Ministers argue it could lead to large savings and benefits to the public. But the FBU said PCCs governing fire and rescue services would cause the "fragmentation" of emergency services. 'Threaten' public trustCurrently fire and rescue services are overseen by bodies made up of local councillors. The government has said it wants to see a more joined-up approach in the way police and fire services work together. As well as proposing to make PCCs responsible for some fire services, it has also said that fire chiefs could become chief constables and run both police and fire services under a PCC. But the FBU said associations with the police could damage the trust firefighters have built in their communities. In a statement on its website, the union said PCCs did not "bring any skills or expertise to the the fire and rescue service", with some having an "unfortunate record for ill-judged interference in operational matters". It added: "Enabling PCCs to govern fire and rescue services will neither deliver economic, efficient or effective emergency services, nor optimise public safety. 'Half baked suggestion'FBU general secretary Matt Wrack described the proposal as a "half baked suggestion" and accused "one or two" PCCs supporting the plan of "empire building". He told the BBC: "There's very little evidence, there's no research been carried out, there's no support for it among firefighters and there's no support for it among police officers, there's no support among local communities and yet the government seems to be intent on forcing it though." But Surrey PCC Kevin Hurley said: "There are many similarities in the way in which fire services and police services work, the way they are trained, the way they acquire their equipment and so on." Mr Hurley said it would be better for the services to work together to support merging "back office functions" and "make the best of this in the public interest", rather than trying to block the proposals. "Money is always going to be an issue in terms of what the fire service or police can put out into the field, and there are all sorts of opportunities to take cost out and put that money back into the front line," he added. Home Secretary Theresa May said she was "determined" to improve efficiency in fire and rescue services. She said fire services had poor procurement, IT systems and buildings management and indicated plans to introduce an independent inspectorate as well as ordering routine performance data to be published. Mrs May said: "I look at the fire and rescue service and I see the need for many of the same reforms that I started in policing five years ago. "Better local accountability, more transparency and a relentless focus on efficiency. "So, while I continue to finish the job of reform in policing, I am also determined to properly kick start the job of reform in fire." She added that allowing PCCs to take over fire and rescue authorities would "provide direct, democratic accountability in fire as we now have in policing". The FBU said the plans were a "smokescreen for the government's cost-cutting" and would negatively affect polices forces, too. Article courtesy of the BBC.