on the 11th April 2019 at 11:46 - Posted in Police Blog
Police chiefs have voiced fears that inflammatory rhetoric from politicians and activists could fuel Brexit tensions as they revealed they have amassed their biggest ever peacetime reserve of 10,000 officers to deal with potential unrest in the event of no deal.
The chair of the National Police Chiefs Council, Martin Hewitt, warned â€œprominent individualsâ€ involved in the protracted Brexit debate should avoid inciting anger given the â€œfebrileâ€ and â€œemotiveâ€ atmosphere, amid concerns of violence and disorder.
Hewitt said: â€œThis is highly emotive ... I think there is a responsibility on those individuals that have a platform, and have a voice, to communicate in a way that is temperate and is not in any way going to inflame peopleâ€™s views or cause any actions out of there. 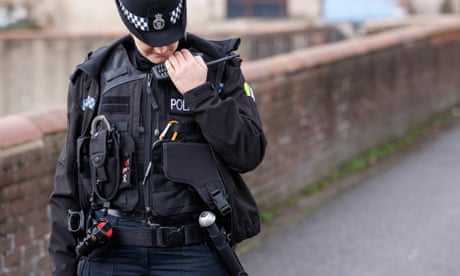 â€œI think we are in an incredibly febrile atmosphere. There is a lot of angry talk that you can pick up if you look across social media.â€
He said it was â€œincumbent on anybody in a position of responsibility and who has a voice to just think carefully about the way they express their viewsâ€ to avoid inciting unwanted behaviour.
The NPCC lead for Brexit planning, chief constable Charlie Hall, said at least 10,000 officers trained in quelling disorder were ready for deployment across England, Wales, Scotland and Northern Ireland, and trained in tactics to tackle looting in the event of shortages and violence if tensions spill over.
That was a greater contingent of officers, Hall said, than deployed to reinforce local forces during the 2011 riots across England, the worst since the end of the second world war.
Police have refreshed tactics in case they are pitched into conflicts between citizens triggered by Brexit, amid fears a no-deal could lead to shortages of medicines, some food and other key goods.
Hall said reinforcements to forces of at least 10,000 could start within an hour of a request and take eight hours to fully deliver. He stressed police had no intelligence of disorder but he insisted, given the uncertainty, forces had to plan for a worst-case scenario.
Some in policing fear regular services would be decimated if a national mobilisation was needed. Hall said: â€œWe would easily run at that pace for the first seven days.â€
But after that officers may have to work 12-hour shifts and â€œnon-coreâ€ police activity could be cut, such as training, community work and crime prevention work.
The military could be used and police and army chiefs have held talks about how they could be used if needed.

Hall said police would not guard supply chains for medicines and food because those responsible had enough time to put plans into place and police feared being stretched too thin. Ports would be expected to â€œpoliceâ€ any queues themselves with uniformed police officers on standby if crimes were committed.
Hall said: â€œThis is where our push has been back to those sectors, those parts of government and private sector. Itâ€™s your responsibility to look at your individual supply chains and you should not be looking to police to come in and supplement to keep your supply chains running.â€
Officers are being trained in case Northern Ireland needs reinforcements, with up to 1,000 mainland officers being taught tactics needed in the region.
Hall said 15 out of 43 forces in England and Wales had put some restrictions on leave, and two forces, Kent and Hampshire, had requested mutual aid and discussions had been held with others in case they needed it.
He said there had been 37 Brexit-related crimes in the last fortnight, half of which were malicious communication, with other offences including verbal abuse and harassment.
Commander Adrian Usher said there was a direct link between Brexit events and increased threats received by MPs. Usher, who leads on protection for parliamentarians in Westminster, said: â€œWeâ€™ve seen a greater level of abuse reported to us. As we move towards key dates in the Brexit calendar, we have seen spikes in those numbers.â€
The police chiefs also said that there was a hate crime spike after the 2016 referendum which fell, but never returned back to the levels before the vote. Last year there was a 17% increase in hate crimes, with 94,000 hate crimes recorded, and there are thought to have been considerably more.