The Best Golfing Story I Have Heard ! 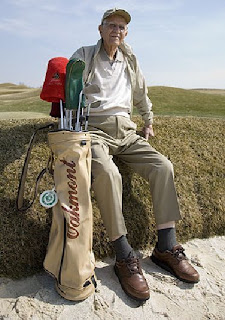 Toward the end of the Sunday service, the Minister asked,"How many of you have forgiven your enemies?" 80% held up their hands.

The Minister then repeated his question.All responded this time, except one man,an avid golfer named Walter Barnes, who attended church only when the weather was bad.

"Mr. Barnes, it's obviously not a good morning for golf. It's good to see you here today. Are you not willing to forgive your enemies?"

"I don't have any," he replied gruffly. "Mr Barnes, that is very unusual. How old are you?"

"Ninety-eight," he replied. The congregation stood up and clapped their hands.

"Oh, Mr. Barnes, would you please come down in front & tell us all how a person can live ninety-eight years & not have an enemy in the world?"

The old golfer tottered down the aisle, stopped in front of the pulpit, turned around, faced the congregation, and said simply,

"I outlived the bastards."